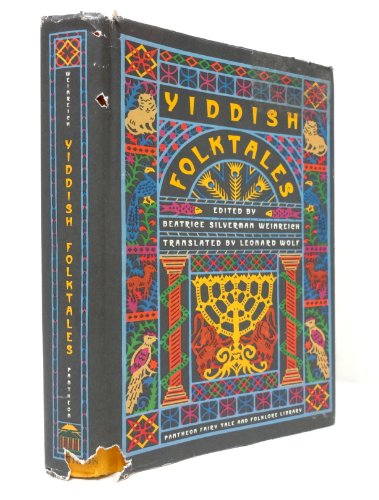 Nearly 200 tales in this collection of Jewish folklore reveal the rich culture and tradition of Eastern European Jewry.

Beatrice Silverman Weinreich is a research associate at the YIVO Institute for Jewish Research in New York and co-editor of the journal Yidisher Folklore.

4
THE LUCK THAT SNORED


Once upon a time there were two brothers, one rich and the other poor. The poor brother was a servant in his rich brother’s house. One day as he was standing guard at the gate, there came a tiny man wearing a golden cat and carrying a sack of gold on his shoulders.

“Who are you?” the poor brother asked.

The poor brother was amazed. “Perhaps you can tell me where I can find my luck?” he said.

“Of course I can, but it won’t do you any good,” said the tiny man. “Because he’s lying in a deserted field that’s hard to find. And your luck is mangy and run down and asleep.”

But the poor brother begged and pleased and wept, until finally the man took pity on him. “All right then, I’ll tell you,” he said. “Go off that way for a long, long time till you come to a field. Go past it for a long time till you come to another field, where you’ll see thousands of lucks lying asleep. Don’t wake them. Go on until you see thousands of other lucks who have just woken up. They will be sitting around yawning and scratching themselves, but don’t let that bother you. Keep going, keep searching until you find a luck who’s sleeping sounder than the others, and snoring louder. That one is your luck.”

And when the little man with the gold cap had finished speaking, he disappeared.

Early the next morning the poor brother started off in search of his luck. He walked on and on until he came to a barren field, just as the little man had said. He didn’t stop but went on until he came to another field that was equally barren. He looked about and saw a great many lucks sleeping and snoring, but he did not disturb them. He saw others who sat around yawning and scratching themselves, but he paid no attention.

He went on and one, searching and searching, until he saw a luck That was sleeping more deeply than the others. He went up and tried to wake him: “Luck, my luck, wake up. Why do you sleep so hard?” His luck never stirred, just slept and snored. Again he tried to wake him, but nothing helped. Finally the poor man wept. “Luck, ah my luck,” he pleaded, “don’t sleep anymore. Pay attention. My wife and children are hungry. Help me. Give me something.”

His luck said nothing. But he put a scabby hand into his breast pocket, took out a silver gulden, and handed it to the poor man.

“What good will this do?” the man asked.

“Some good, some good,” grumbled the luck. “Go to the marketplace and buy the first thing that comes your way.”

The poor man went to the marketplace, where he met a peasant with a hen to sell. So he bought the hen and took it home. He went to sleep, and the hen flew up to a shelf and went to sleep too.

When the poor man woke in the morning, he saw something gleaming on the shelf. He got out of bed and found that the hen had laid a golden egg. He woke his wife and children and showed them the golden egg, and they all danced and leaped for joy, Then the poor man took the egg and sold it for a great deal of money. And from that time on, he grew richer and richer.

Things are well for them
And for us, even better.


Once upon a time the dogs applied to the king for a decree that would forbid people to bother dogs. The king signed the decree and gave it to them, but then the dogs couldn’t think of a place to put it. Finally they passed it to the cats for safekeeping, because cats are able to creep into all sorts of snug nooks and crannies. The cats took the paper and hid it in the eaves of a house.

Sometime later, dogcatchers started rounding up dogs. “Hey,” cried the dogs, “wait a minute. We’ve got a decree from the king that says you can’t bother us.”

“If that’s true,” said the dogcatchers, “where is it?”

So the dogs ran to the cats and said, “We need the king’s decree that forbids anyone to bother us. Where is it?”

“Wait a minute. We’ll go and look,” said the cats, and off they went to the eaves. The document was there all right, but the mice had gnawed it to shreds and tatters, When the dogs heard this, they were furious and chased the mice.

And that’s how it’s been ever since.