Items related to Trump: The Art of the Deal

Trump: The Art of the Deal 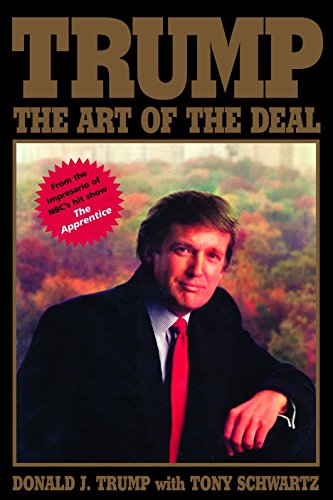 President Donald J. Trump lays out his professional and personal worldview in this classic work—a firsthand account of the rise of America’s foremost deal-maker.

“I like thinking big. I always have. To me it’s very simple: If you’re going to be thinking anyway, you might as well think big.”—Donald J. Trump

Here is Trump in action—how he runs his organization and how he runs his life—as he meets the people he needs to meet, chats with family and friends, clashes with enemies, and challenges conventional thinking. But even a maverick plays by rules, and Trump has formulated time-tested guidelines for success. He isolates the common elements in his greatest accomplishments; he shatters myths; he names names, spells out the zeros, and fully reveals the deal-maker’s art. And throughout, Trump talks—really talks—about how he does it. Trump: The Art of the Deal is an unguarded look at the mind of a brilliant entrepreneur—the ultimate read for anyone interested in the man behind the spotlight.

Praise for Trump: The Art of the Deal

“Trump makes one believe for a moment in the American dream again.”—The New York Times

From the Impresario of NBC's hit show "The Apprentice
TRUMP ON TRUMP: "I like thinking big. I always have. To me it's very simple: if you're going to be thinking anyway, you might as well think big."
And here's how he does it: the art of the deal.
Beginning with a week in Trump's high-stakes life, "Trump: The Art of the Deal gives us Trump in action. We see just how he operates day to day--how he runs his business and how he runs his life--as he chats with friends and family, clashes with enemies, efficiently buys up Atlantic City's top casinos, changes the face of the New York City skyline . . . and plans the tallest building in the world.
TRUMP ON TRUMP: "I play it very loose. I don't carry a briefcase. I try not to schedule too many meetings. I leave my door open. . . . I prefer to come to work each day and just see what develops."
Even a maverick plays by rules, and here Trump formulates his own eleven guidelines for success. He isolates the common elements in his greatest deals; he shatters myths ("You don't necessarily need the best location. What you need is the best deal"); he names names, spells out the zeros, and fully reveals the deal-maker's art: from the abandoned property that became the Jacob K. Javits Convention Center to the seedy hotel that became the Grand Hyatt; from the race to rebuild Central Park's Wollman Skating Rink to the byzantine saga of the property that became Trump Tower. And throughout, Trump talks--"really talks--about how he does it.
TRUMP ON TRUMP: "I always go into a deal anticipating the worst. If you plan for the worst--if you can live with the worst--the good will always take care of itself."
Donald Trump is blunt, brash, surprisingly old-fashioned in spots--and always, always an original. "Trump: The Art of the Deal is an unguarded look at the mind of a brilliant entrepreneur and an unprecedented education in the art of the deal. It's the most streetwise business book there is--and a sizzling read for anyone interested in money and success.

Donald J. Trump is the forty-fifth president of the United States. He is the very definition of the American success story, continually setting standards of excellence while expanding his interests in real estate, gaming, sports, and entertainment. He was named the Hotel and Real Estate Visionary of the Century by the UJA Federation. Trump is the New York Times bestselling author of many books, including Time to Get Tough, The America We Deserve, Think Like a Billionaire, How to Get Rich, Surviving at the Top, The Art of the Comeback, and The Art of the Deal. These books have sold millions of copies. An ardent philanthropist, Trump is involved with numerous civic and charitable organizations.

9. Trump: The Art of the Deal (Hardback or Cased Book)