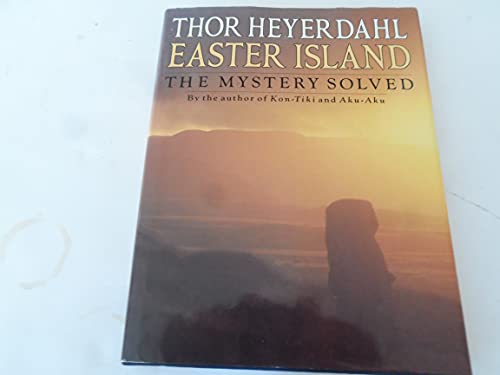 This handsome volume is the story of Thor Heyerdahl's love of a mystery--and of an island and its people. Over thirty years ago (from 1989), the man who did such important, pioneering work in Kon-Tiki wrote another best-selling book, Aku-Aku, about Easter Island. More recently, Heyerdahl was invited to return to Easter Island and there confronted the conundrum of the famous, haunting statues that stud the lovely island, massive and mysterious. How were they made? How were they moved? What did the natives mean when they had said, those many years earlier, that "the statues walked"? Who made them--and where did the Easter Islanders themselves come from? What did earlier visitors discover--or believe? It is characteristic of Dr. Heyerdahl's many explorations that his research, his theories, his conclusions all are entwined with objectives greater than mere adventure. Just as his expeditions have been partly in pursuit and proof of his theories that early man traveled further (and faster) than others had previously suspected, and that the peoples of many cultures can work together peacefully, his probes into the past are coupled with an enduring, endearing conviction--never before displayed better than in this volume--that just as we must avoid prejudice in the present, we should not look down on the peoples of the past--for they and we have more in common than it might seem.

Thor Heyerdahl was a pioneer in the field of experimental archaeology. His 1947 Kon-Tiki expedition proved that the Incas were capable of sailing across the Pacific. He was awarded the Royal Gold Medal by the Royal Geographical Society in 1964, and was voted the Norwegian of the Century in 2000. He is the author of In the Footsteps of Adam and Kon-Tiki.