Items related to The Code of the Woosters

Wodehouse, P.G. The Code of the Woosters

The Code of the Woosters 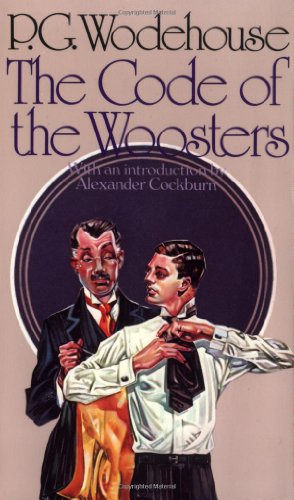 P.G.Wodehouse's best-loved creation by far is the master-servant team of Bertie Wooster, the likable nitwit, and Jeeves, his effortlessly superior valet and protector. This unlikely duo is as famous as Holmes and Watson, Don Quixote and Sancho Panza, and Tracy and Hepburn, but they have their own very special inimitable charm. According to Walter Clemons, Newsweek, "They are at their best in The Code of the Woosters," in which Bertie is rescued from his bumbling escapades time and time again by that gentleman's gentleman: Jeeves.

A Jeeves and Wooster novel

‘You don’t analyse such sunlit perfection, you just bask in its warmth and splendour. Like Jeeves, Wodehouse stands alone.’ Stephen Fry

When Bertie Wooster goes to Totleigh Towers to pour oil on the troubled waters of a lovers' breach between Madeline Bassett and Gussie Fink-Nottle, he isn’t expecting to see Aunt Dahlia there – nor to be instructed by her to steal some silver. But purloining the antique cow creamer from under the baleful nose of Sir Watkyn Bassett is the least of Bertie’s tasks. He has to restore true love to both Madeline and Gussie and to the Revd Stinker Pinker and Stiffy Byng – and confound the insane ambitions of would-be Dictator Roderick Spode and his Black Shorts. It’s a situation that only Jeeves can unravel...

1. The Code of the Woosters

2. The Code of the Woosters

3. The Code of the Woosters

4. THE CODE OF THE WOOSTERS