Items related to Gods, Graves and Scholars: A Story of Archaeology,... 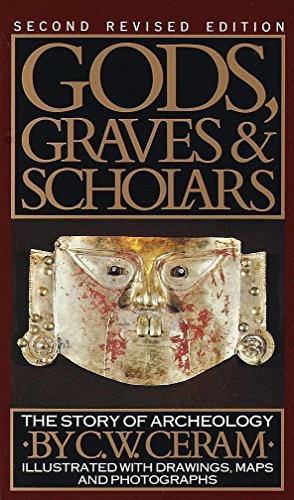 C.W. Ceram visualized archeology as a wonderful combination of high adventure, romance, history and scholarship, and this book, a chronicle of man's search for his past, reads like a dramatic narrative. We travel with Heinrich Schliemann as, defying the ridicule of the learned world, he actually unearths the remains of the ancient city of Troy. We share the excitement of Lord Carnarvon and Howard Carter as they first glimpse the riches of Tutankhamen's tomb, of George Smith when he found the ancient clay tablets that contained the records of the Biblical Flood. We rediscover the ruined splendors of the Hanging Gardens of Babylon, one of the wonders of the ancient wold; of Chichen Itza, the abandoned pyramids of the Maya: and the legendary Labyrinth of tile Minotaur in Crete. Here is much of the history of civilization and the stories of the men who rediscovered it.

Illustrated with drawings, maps, and photographs

C. W. Ceram (January 20, 1915 – April 12, 1972) was a German journalist and author. His most notable work, Gods, Graves and Scholars: The Story of Archaelogy – was published in 28 languages and had over 5 million copies in circulation. The Ceram Prize in archaeology is posthumously named after him.