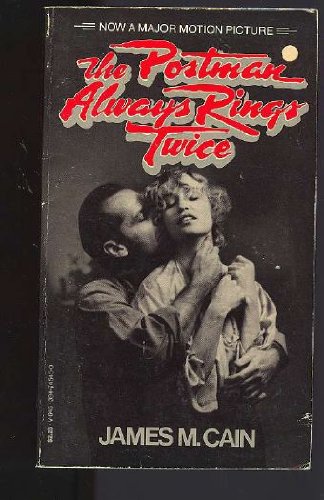 Penzler Pick, April 2000: It is sometimes easy to trace a literary genre to its source, and James M. Cain's first novel, The Postman Always Rings Twice, is the noir novel that paved the way for all the noir fiction that followed. The famous film starring Lana Turner and John Garfield is notoriously dark, but the novel is even more full of despair and devoid of hope. It is a short book--little more than a novella--but its searing characterization and depiction of tawdry greed and lust is branded into every reader's memory.

Frank Chambers, a drifter, is dropped from the back of a truck at a rundown rural diner. When he spots Cora, the owner's wife, he instantly decides to stay. The sexy young woman, married to Nick, a violent and thuggish boor, is equally attracted to the younger man and sees him as her way out of her hopeless, boring life. They begin a clandestine affair and plot to kill Nick, beginning their own journey toward destruction.

Horace McCoy, David Goodis, Jim Thompson, and the other notable noir writers never achieved Cain's spare brilliance. Virtually all of his major works have been filmed, though several Hollywood studios refused to make the films, directors refused to be involved, and actors turned down roles because of their repugnance at the lack of morality inherent in all Cain's characters. Reading him may not be fit for a Sunday school class, but once you begin you will be unable to resist continuing, like picking at a painful scab or watching a tarantula inside a glass dome. --Otto Penzler

An amoral young tramp.  A beautiful, sullen woman with an inconvenient husband.  A problem that has only one grisly solution--a solution that only creates other problems that no one can ever solve.

First published in 1934 and banned in Boston for its explosive mixture of violence and eroticism, The Postman Always Rings Twice is a classic of the roman noir. It established James M. Cain as a major novelist with an unsparing vision of America's bleak underside, and was acknowledged by Albert Camus as the model for The Stranger.
From the Trade Paperback edition.