Items related to The Sound and the Fury

Faulkner, William The Sound and the Fury

The Sound and the Fury 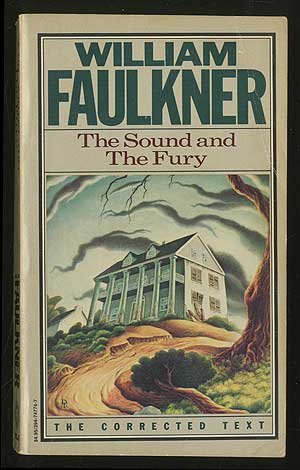 The ostensible subject of The Sound and the Fury is the dissolution of the Compsons, one of those august old Mississippi families that fell on hard times and wild eccentricity after the Civil War. But in fact what William Faulkner is really after in his legendary novel is the kaleidoscope of consciousness--the overwrought mind caught in the act of thought. His rich, dark, scandal-ridden story of squandered fortune, incest (in thought if not in deed), madness, congenital brain damage, theft, illegitimacy, and stoic endurance is told in the interior voices of three Compson brothers: first Benjy, the "idiot" man-child who blurs together three decades of inchoate sensations as he stalks the fringes of the family's former pasture; next Quentin, torturing himself brilliantly, obsessively over Caddy's lost virginity and his own failure to recover the family's honor as he wanders around the seedy fringes of Boston; and finally Jason, heartless, shrewd, sneaking, nursing a perpetual sense of injury and outrage against his outrageous family.

If Benjy's section is the most daringly experimental, Jason's is the most harrowing. "Once a bitch always a bitch, what I say," he begins, lacing into Caddy's illegitimate daughter, and then proceeds to hurl mud at blacks, Jews, his sacred Compson ancestors, his glamorous, promiscuous sister, his doomed brother Quentin, his ailing mother, and the long-suffering black servant Dilsey who holds the family together by sheer force of character.

Notoriously "difficult," The Sound and the Fury is actually one of Faulkner's more accessible works once you get past the abrupt, unannounced time shifts--and certainly the most powerful emotionally. Everything is here: the complex equilibrium of pre-civil rights race relations; the conflict between Yankee capitalism and Southern agrarian values; a meditation on time, consciousness, and Western philosophy. And all of it is rendered in prose so gorgeous it can take your breath away. Here, for instance, Quentin recalls an autumnal encounter back home with the old black possum hunter Uncle Louis:

And we'd sit in the dry leaves that whispered a little with the slow respiration of our waiting and with the slow breathing of the earth and the windless October, the rank smell of the lantern fouling the brittle air, listening to the dogs and to the echo of Louis' voice dying away. He never raised it, yet on a still night we have heard it from our front porch. When he called the dogs in he sounded just like the horn he carried slung on his shoulder and never used, but clearer, mellower, as though his voice were a part of darkness and silence, coiling out of it, coiling into it again. WhoOoooo. WhoOoooo. WhoOooooooooooooooo.

What Faulkner has created is a modernist epic in which characters assume the stature of gods and the primal family events resonate like myths. It is The Sound and the Fury that secures his place in what Edmund Wilson called "the full-dressed post-Flaubert group of Conrad, Joyce, and Proust." --David Laskin From the Inside Flap:

First published in 1929, Faulkner created his "heart's darling," the beautiful and tragic Caddy Compson, whose story Faulkner told through separate monologues by her three brothers--the idiot Benjy, the neurotic suicidal Quentin and the monstrous Jason.
From the Trade Paperback edition.

1. The Sound and the Fury

2. The Sound and the Fury : The Corrected Text

3. THE SOUND AND THE FURY

4. The Sound and the Fury