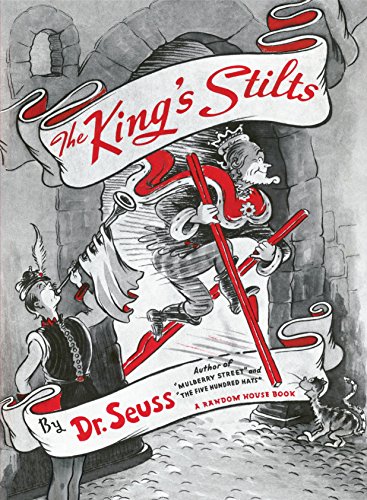 A seventy-five-year-old King gets new vintage cover art for his anniversary!

Celebrate the 75th birthday of Dr. Seuss's classic treatise on the importance of a balanced life with our Anniversary Edition featuring cover art from the books original publication! A Seussian spin on a conventional fairy tale, The King's Stilts is as topical today as when it was first published in 1939. It's the story of a devoted king who works hard and plays hard—and whose entire kingdom is threatened when his beloved stilts are stolen and he is too distraught to do his job. Written in prose instead of rhyme (unlike Seuss's later works), The King's Stilts nevertheless addresses subjects that we know Dr. Seuss was passionate about throughout his life: duty (as in Horton Hears a Who and Horton Hatches the Egg); the abuse of power (as in The 500 Hats of Bartholomew Cubbins and Yertle the Turtle); deceit (as in The Bippolo Seed and How the Grinch Stole Christmas)--and even cats (as in The Cat in the Hat and I Can Lick 30 Tigers Today)! A perfect way to introduce new readers to an old classic, or to reward existing fans with a collectible new edition. Follow the Good Doctor's advice: After a hard day of work, have fun with a great book like The King's Stilts!

Everyone loves Dr. Seuss! A true original, he wrote and illustrated over 50

classic children's books with total sales of more than 100 million copies. For

children of all ages.

Illus. in full color. Every afternoon King Birtram raced around the palace on a pair of old red stilts, until they were stolen. An uproarious tale.