Items related to On Beyond Zebra! (Classic Seuss) 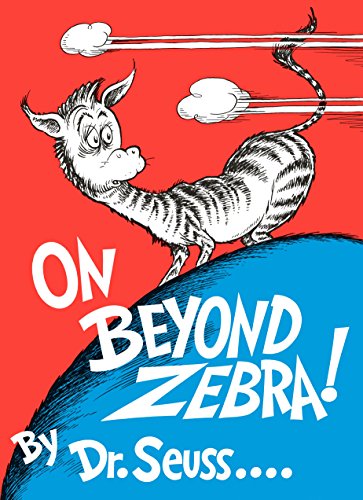 If you think the alphabet stops with Z, you are wrong. So wrong. Leave it to Conrad Cornelius o'Donald o'Dell (with a little help from Dr. Seuss) to create an entirely new alphabet beginning with Z! This rhyming picture book introduces twenty new letters and the creatures that one can spell with them. Discover (and spell) such wonderfully Seussian creations as the Yuzz-a-ma-Tuzz and the High Gargel-orum. Readers young and old will be giggling from beginning to end . . . or should we say, from Yuzz to Hi!

A thoroughly Seussian tweak of the alphabet-book tradition, On Beyond Zebra is about all the letters that most people ignore--the ones that come after Z. Our hero (instantly recognizable to most Seuss fans as the boy who captured Thing One and Thing Two in The Cat in the Hat) takes his young friend, Conrad Cornelius O'Donald O'Dell, on a guided tour of all the weird creatures that begin with letters such as Yuzz, Wumbus, and Glikk. "And Nuh is the letter I use to spell Nutches, Who live in small caves, known as Nitches, for hutches." The message is pretty simple: the alphabet pins down boring old "reality," but if you explore further afield there are more interesting worlds to discover. "So, on beyond Z! It's high time you were shown, / That you really don't know all there is to be known." Explorers in need of guidance will even find a table of useful new letters (a beyondabet? a WumbaGlikk?) in the back. (Ages 4 to 8) --Richard Farr

"Children will be intrigued and delighted with the nonsensical alphabet that begins after Z."--Booklist.

Book Description Hardcover. Condition: New. Subscription edition. No dust jacket as mailed. No visible signs of wear to book or interior. Kept in our display case to avoid wear. In new condition. Mockingbird Books has two brick and mortar used book stores located in Sebastopol and Guerneville California. We carefully inspect all our books for condition. You can trust our listing is accurate and all our offerings are correctly assessed. Seller Inventory # 207054

Book Description Hardcover. Condition: New. No Jacket. BRAND NEW, PRISTINE CONDITION. Stored in shrink wrapped plastic for protection and preservation. The book has never been opened even once. Fresh out-of-the-box from the publisher. Spine is unbroken. No scuffs. No dents. No price stickers. Absolutely 100% top grade pristine condition, like an uncirculated coin. ISBN: 9780394800844. Please, please, please feel free to get in touch with any questions; for additional photos; or any interest in making a purchase. This was received from the publisher just prior to going out-of-print forever and the publication edition would be from the last reprint of the title. Seller Inventory # ZebraNew