Items related to The Phantom Tollbooth 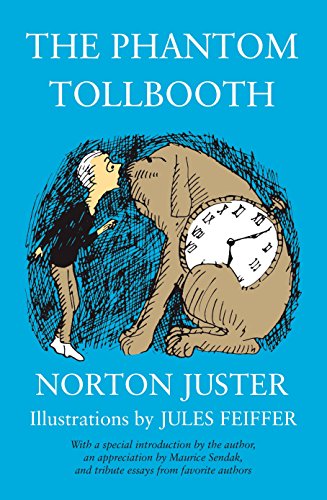 With almost 4 million copies sold over 50 years after its original publication, generations of readers have now journeyed with Milo to the Lands Beyond in this beloved classic that Philip Pullman says “comes up bright and new every time I read it . . . it will continue to charm and delight for a very long time yet. And teach us some wisdom, too.” Enriched by Jules Feiffer’s splendid illustrations, the wit, wisdom, and wordplay of Norton Juster’s offbeat fantasy are as beguiling as ever.

For Milo, everything’s a bore. When a tollbooth mysteriously appears in his room, he drives through only because he’s got nothing better to do. But on the other side, things seem different. Milo visits the Island of Conclusions (you get there by jumping), learns about time from a ticking watchdog named Tock, and even embarks on a quest to rescue Rhyme and Reason. Somewhere along the way, Milo realizes something astonishing. Life is far from dull. In fact, it’s exciting beyond his wildest dreams!

Illustrated in black-and-white. We're celebrating the thirty-fifth anniversary (1996) of this modern kids' classic with a special hardcover edition! This ingenious fantasy centeres around Milo, a bored ten-year-old who comes home to find a large toy tollbooth sitting in his room. Joining forces with a watchdog named Tock, Milo drives through the tollbooth's gates and begins a memorable journey. He meets such characters as the foolish, yet lovable Humbug, the Mathemagician, and the not-so-wicked "Which," Faintly Macabre, who gives Milo the "impossible" mission of returning two princesses to the Kingdom of Wisdom...