Items related to Tallest tower: Eiffel and the Belle Epoque 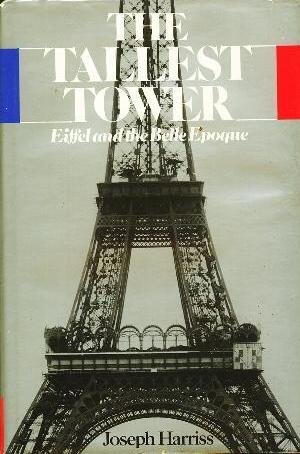 The Paris Universal Exposition of 1889 celebrated France's recovery from the humiliating defeat of the Franco-Prussian War, and Gustave Eiffel's thousand-foot tower represented the glory of that achievement.  But the iron tower was a stunning accomplishment in its own right, the tallest structure made by man.The story of the Eiffel Tower is also that of a master builder of the industrializing nineteenth century.  Wielding iron in new ways, Eiffel scattered his creations around the globe--train stations and vaulting bridges in Europe, South America, and Indochina, the interior bracing of the Statue of Liberty in the United States.  At the peak of his career he easily won the contract to design the audacious monument that came to symbolize not only Paris but a rare moment in history.Over the years the tower has been scorned, exalted, analyzed by philosophers for hidden meaning, and seized upon by eccentrics for bizarre stunts.  Exuberant culmination of the nineteenth century's unreserved enthusiasm for machines, the Eiffel Tower remains the world's most famous landmark.

Joseph Harriss has had an international career as reporter, writer, and editor.  He has been a correspondent for Time based in Paris, Algiers, and Brussels, a senior editor and roving correspondent for Reader's Digest covering Europe, a regular contributor to Smithsonian, and a columnist for The Dallas Morning News and The American Spectator.  He makes his home in Paris.

"An interesting story interestingly told, and as such it is welcome."--The New York Times"Fascinating and highly instructive... a book not to miss."--The New Yorker"Harriss succeeds admirably... This is a well-organized, exceptionally readable book; entertaining, informative, and highly recommended."--Library Journal"Certainly the best biography of a building and the cultural climate which spawned it we've read in a very long time."--Kirkus Reviews"The book is written with wit and charm."--Los Angeles Times

Book Description Houghton Mifflin, 1975. Hardcover. Condition: New. THE BOOK IS NEW. MAY HAVE MINOR SHELF WEAR.MULTIPLE COPIES AVAILABLE. FAST SHIPPING. WE OFFER FREE TRACKING NUMBER UPON FAST SHIPMENT OF YOUR ORDER. PLEASE LET US KNOW IF YOU HAVE ANY QUESTIONS AND WE WILL GET BACK TO YOU ASAP. Thank you for your interest. Seller Inventory # 0395204402-N