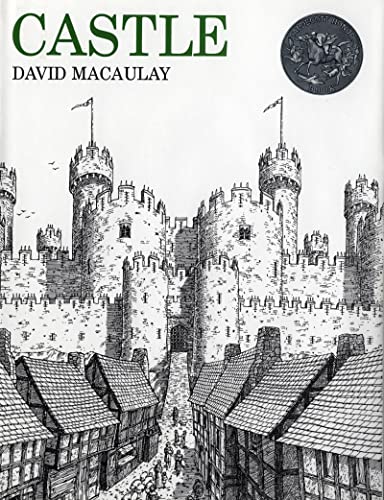 The word itself conjures up mystery, romance, intrigue, and grandeur. What could be more perfect for an author/illustrator who has continually stripped away the mystique of architectural structures that have long fascinated modern man? With typical zest and wry sense of humor punctuating his drawings, David Macaulay traces the step-by-step planning and construction of both castle and town.

Imagine yourself in 13th-century England. King Edward I has just named the fictitious Kevin le Strange to be the Lord of Aberwyvern--"a rich but rebellious area of Northwest Wales." Lord Kevin's first task is to oversee the construction of a strategically placed castle and town in order to assure that England can "dominate the Welsh once and for all." And a story is born! In the Caldecott Honor Book Castle, David Macaulay--author, illustrator, former architect and teacher--sets his sights on the creation and destiny of Lord Kevin's magnificent castle perched on a bluff overlooking the sea. Brick by brick, tool by tool, worker by worker, we witness the methodical construction of a castle through exquisitely detailed pen-and-ink illustrations. Children who love to know how things work especially appreciate Macaulay's passion for process and engineering. Moats, arrow loops, plumbing, dungeons, and weaponry are all explained in satisfying detail. This talented author also has a keen sense of irony and tragedy, which is played out in the intricacies of the human story: a castle can be built as a fortress, but ultimately it becomes obsolete when humans discover that cooperation works best. (Ages 9 and older) --Gail Hudson