Items related to The Book of Lost Tales, Part II (History of Middle-earth)

The Book of Lost Tales, Part II (History of Middle-earth) 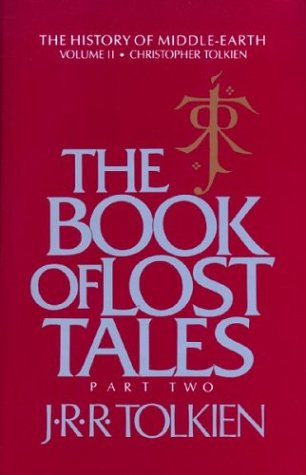 The Book of Lost Tales was the first major work of imagination by J.R.R. Tolkien, begun in 1916, when he was twenty-five years old, and left incomplete several years later. It stands at the beginning of the entire conception of Middle-earth and Valinor, for the Lost Tales were the first form of the myths and legends that came to be called The Silmarillion. Embedded in English legend and association, they are set in the narrative frame of the great westward voyage of a mariner named Eriel (or AElfwine). His destination is Tol Eressea, the Lonely Isle where Elves dwell; from them he learns their true history, the Lost Tales of Elfinesse. The Tales include the earliest accounts of Gods and Elves, Dwarves, Balrogs, and Orcs; of the Silmarils and the Two Trees of Valinor; of Nargothrond and Gondolin; of the geography and cosmography of their invented world.
The Book of Lost Tales is published in two volumes. The first contains the Tales of Valinor; and this second past includes Beren and Luthien, Turin and the Dragon, and the only full narratives of the Necklace of the Dwarves and the Fall of Gondolin. Each tale is followed by a commentary, together with associated poems, and each volume contains extensive information on names and vocabulary of the earliest Elvish languages. Additional books in this series will extend the history of Middle-earth as it was refined and enlarged in later years and will include the long Lays of Beleriand, the Ambarkanta or Shape of the World, the Lhammas or Account of Tongues, annals, maps, and many other previously unpublished writings of J.R.R. Tolkien.

This second part of THE BOOK OF LOST TALES includes the tale of Beneren and Luthien, Turin and the Dragon, Necklace of the Dwarves, and the Fall of Gondolin. Each tale is followed by a commentary in the form of a short essay, together with the texts of associated poems, as well as information on names and vocabulary in the earliest Elvish languages.

J.R.R. Tolkien (1892–1973), beloved throughout the world as the creator of The Hobbit and The Lord of the Rings, was a professor of Anglo-Saxon at Oxford, a fellow of Pembroke College, and a fellow of Merton College until his retirement in 1959. His chief interest was the linguistic aspects of the early English written tradition, but even as he studied these classics he was creating a set of his own.

1. The Book of Lost Tales, Part II (History of Middle-earth)

2. The Book of Lost Tales, Part II (History of Middle-earth)

3. The Book of Lost Tales, Part II (History of Middle-earth)