Items related to The Polar Express 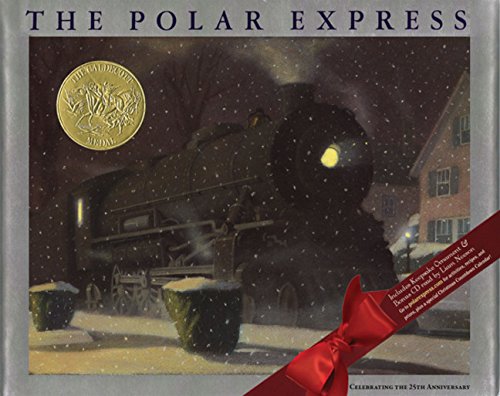 For twenty years, The Polar Express has been a worldwide bestseller and Christmas classic. A perfect keepsake for any family, this beautiful edition can be handed down to each new generation of readers.

In 1986 The Polar Express was awarded the prestigious Caldecott Medal and hit the New York Times bestseller list. Since that time, more than six and a half million copies have been sold, and every December it faithfully reappears on national bestseller lists. In 2004, The Polar Express became a blockbuster holiday movie. The DVD release in 2005 assures, that like the book, the movie will become a holiday classic.

One couldn't select a more delightful and exciting premise for a children's book than the tale of a young boy lying awake on Christmas Eve only to have Santa Claus sweep by and take him on a trip with other children to the North Pole. And one couldn't ask for a more talented artist and writer to tell the story than Chris Van Allsburg. Allsburg, a sculptor who entered the genre nonchalantly when he created a children's book as a diversion from his sculpting, won the 1986 Caldecott Medal for this book, one of several award winners he's produced. The Polar Express rings with vitality and wonder.

Over the past twenty-five years, many people have shared stories with me about the effect that reading The Polar Express has had on their families and on their celebration of Christmas.

One of the most poignant was told to me five or six years ago at a book signing in the Midwest, on a snowy December evening. As I inscribed a book to a woman in her sixties, she told me that it was the second copy she had owned, and wanted to know if she could she tell me what had happened to the first. "Of course," I answered.

A dozen years earlier the woman, who had no children of her own, befriended a neighbor, a boy of about seven, named Eddie. He would often cross his driveway to visit her.

She had a collection of picture books, which she read to him, but around the holidays, the only story he ever wanted to hear, over and over, was The Polar Express. One year she offered to give him the book, but Eddie declined because he wanted to hear her read it aloud to him, which she continued to do every year until the boy and his family moved away.

Years later the woman learned from a mutual acquaintance that Eddie had grown up and become a soldier. He was stationed in Iraq. Since Christmas was approaching, the woman decided to send him a gift box. She included candy, cookies, socks, and her old copy of The Polar Express. She wasn't sure what a nineteen-year-old battle-weary soldier would do with the book in an army barracks in the Middle East, but she wanted him to have it. A month later, after the holidays had passed, she received a letter from Eddie.

He told her he was very happy to have heard from her and to get the box of gifts. He had opened it in his barracks, just before curfew, with some of his fellow GIs already in their bunks. A soldier in the next bunk spotted the book. He knew it well from his own childhood and asked Eddie to read it. "Out loud?" he asked. "Yeah," his buddy told him.

Eddie, quietly and a little self-consciously, read The Polar Express. When he'd finished and closed the book, a moment of silence passed. Then from behind him a voice called out, "Read it again," and another joined in, "Yeah, read it again," and a third added, "This time, louder." So Eddie did.

Chris Van Allsburg is the winner of two Caldecott Medals, for "Jumanji" and "The Polar Express", as well as the recipient of a Caldecott Honor Book for "The Garden of Abdul Gasazi". The author and illustrator of numerous picture books for children, he has also been awarded the Regina Medal for lifetime achievement in children's literature. In 1982, Jumanji won the National Book Award and in 1996, it was made into a popular feature film. Chris Van Allsburg was formerly an instructor at the Rhode Island School of Design. He lives in Rhode Island with his wife and two children.

Book Description Hardcover. Condition: New. Dust Jacket Condition: New. 1st Edition. FIRST EDITION/LATER PRINTING - NEW & UNREAD - SPINE HAS NOT BEEN CRACKED - no flaws or defects - Hardcover in Dust Jacket as issued. DUST JACKET IN PROTECTIVE BRODART COVER - INCLUDES SEALED CD STILL IN ORIGINAL PACKING OF LIAM NEESON READING POLAR EXPRESS - PHOTOS OF THE ACTUAL BOOK SENT UPON REQUEST. ALL BOOKS HAVE BEEN BOXED IN CLIMATE CONTROLLED STORAGE AND HAVE NOT BEEN TOUCHED BY ANY OTHER HUMAN THAN ME FOR AT LEAST THE LAST 10 YEARS - ALL BOOKS ARE SEALED AND BUBBLE WRAPPED AND SHIPPED IN BOXES - YOU CAN BUY HERE WITH CONFIDENCE KNOWING THAT A BUNCH OF STRANGERS HAVE NOT HANDLED YOUR BOOK -. Seller Inventory # 008937