Items related to The Lays of Beleriand

Tolkien, J.R.R. The Lays of Beleriand

The Lays of Beleriand 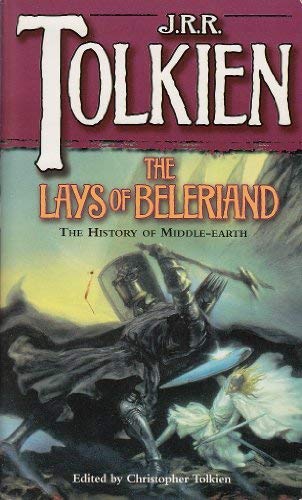 The Lays of Beleriand are epic stories in verse form of the Elder days of Middle-earth. Contained herein is The Lay of the Children of Hurin, which tell the tale of Turin Son of Hurin and Glorund the Dragon. The Lay of Leithian tells of Thingol, of the meeting of Beren and Luthien, and of the battle between Fiingolfin and Morgoth. Together these Lays form an important backdrop to The Silmarillion, and illuminate some of the oldest tales of Middle-earth.
Included in the volume is C.S. Lewis's original commentary to Tolkien when the work was first read at a literary gathering of The Inklings.

wer of Tolkien's central characters . . . shines through." Library Journal.
A treasure trove of lore for old and new friends of Middle-earth. Enter now, reader, and learn of the hero of the Lay of Leithian. Hear as well of the early years of Turin the Tall, as he journeys through darkness on his quest to find his father. Read of his rescue by Beleg the Brave, and of the dark destiny that haunts their friendship! Only the genius of Tolkien could create a fantasy more real than reality, a reality more fantastic than fantasy!

CHRISTOPHER TOLKIEN is the third son of J.R.R. Tolkien. Appointed by Tolkien to be his literary executor, he has devoted himself to the editing and publication of unpublished writings, notably The Silmarillion, Unfinished Tales, and The History of Middle-earth.

1. The Lays of Beleriand (The History of Middle-Earth, Vol. 3)