Items related to My Antonia 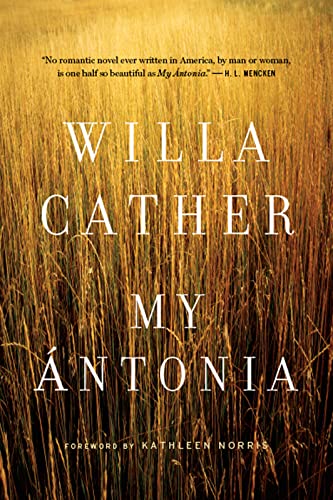 My Ántonia is one of eight classic American novels featured in the National Endowment for the Arts Big Read initiative, designed to restore reading to the center of American culture. The Big Read provides citizens with the opportunity to read and discuss a single book within their communities and is supported by expansive outreach and publicity campaigns. Over one hundred communities will participate in 2007, each with a program lasting approximately one month. A kick-off event is followed by panel discussions, film screenings, and lectures or public readings devoted to the book.

Willa Cather’s heartfelt novel is the unforgettable story of an immigrant woman’s life on the hardscrabble Nebraska plains. Through Jim Burden’s affectionate reminiscence of his childhood friend, the free-spirited Ántonia Shimerda, a larger, uniquely American portrait emerges, both of a community struggling with unforgiving terrain and of a woman who, amid great hardship, stands as a timeless inspiration.

It seems almost sacrilege to infringe upon a book as soulful and rich as Willa Cather's My Ántonia by offering comment. First published in 1918, and set in Nebraska in the late 19th century, this tale of the spirited daughter of a Bohemian immigrant family planning to farm on the untamed land ("not a country at all but the material out of which countries are made") comes to us through the romantic eyes of Jim Burden. He is, at the time of their meeting, newly orphaned and arriving at his grandparents' neighboring farm on the same night her family strikes out to make good in their new country. Jim chooses the opening words of his recollections deliberately: "I first heard of Ántonia on what seemed to be an interminable journey across the great midland plain of North America," and it seems almost certain that readers of Cather's masterpiece will just as easily pinpoint the first time they heard of Ántonia and her world. It seems equally certain that they, too, will remember that moment as one of great light in an otherwise unremarkable trip through the world.

Ántonia, who, even as a grown woman somewhat downtrodden by circumstance and hard work, "had not lost the fire of life," lies at the center of almost every human condition that Cather's novel effortlessly untangles. She represents immigrant struggles with a foreign land and tongue, the restraints on women of the time (with which Cather was very much concerned), the more general desires for love, family, and companionship, and the great capacity for forbearance that marked the earliest settlers on the frontier.

As if all this humanity weren't enough, Cather paints her descriptions of the vastness of nature--the high, red grass, the road that "ran about like a wild thing," the endless wind on the plains--with strokes so vivid as to make us feel in our bones that we've just come in from a walk on that very terrain ourselves. As the story progresses, Jim goes off to the University in Lincoln to study Latin (later moving on to Harvard and eventually staying put on the East Coast in another neat encompassing of a stage in America's development) and learns Virgil's phrase "Optima dies ... prima fugit" that Cather uses as the novel's epigraph. "The best days are the first to flee"--this could be said equally of childhood and the earliest hours of this country in which the open land, much like My Ántonia, was nothing short of a rhapsody in prairie sky blue. --Melanie Rehak