Items related to Interpreter of Maladies 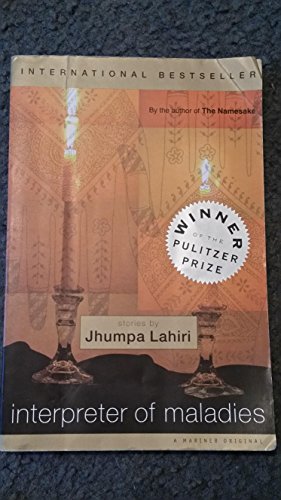 With a new Introduction from the author for the twentieth anniversary

Winner of the Pulitzer Prize for fiction, this stunning debut collection unerring charts the emotional journeys of characters seeking love beyond the barriers of nations and generations. In stories that travel from India to America and back again, Lahiri speaks with universal eloquence to everyone who has ever felt like a foreigner.

Mr. Kapasi, the protagonist of Jhumpa Lahiri's title story, would certainly have his work cut out for him if he were forced to interpret the maladies of all the characters in this eloquent debut collection. Take, for example, Shoba and Shukumar, the young couple in "A Temporary Matter" whose marriage is crumbling in the wake of a stillborn child. Or Miranda in "Sexy," who is involved in a hopeless affair with a married man. But Mr. Kapasi has problems enough of his own; in addition to his regular job working as an interpreter for a doctor who does not speak his patients' language, he also drives tourists to local sites of interest. His fare on this particular day is Mr. and Mrs. Das--first-generation Americans of Indian descent--and their children. During the course of the afternoon, Mr. Kapasi becomes enamored of Mrs. Das and then becomes her unwilling confidant when she reads too much into his profession. "I told you because of your talents," she informs him after divulging a startling secret.

I'm tired of feeling so terrible all the time. Eight years, Mr. Kapasi, I've been in pain eight years. I was hoping you could help me feel better; say the right thing. Suggest some kind of remedy.

Of course, Mr. Kapasi has no cure for what ails Mrs. Das--or himself. Lahiri's subtle, bittersweet ending is characteristic of the collection as a whole. Some of these nine tales are set in India, others in the United States, and most concern characters of Indian heritage. Yet the situations Lahiri's people face, from unhappy marriages to civil war, transcend ethnicity. As the narrator of the last story, "The Third and Final Continent," comments: "There are times I am bewildered by each mile I have traveled, each meal I have eaten, each person I have known, each room in which I have slept." In that single line Jhumpa Lahiri sums up a universal experience, one that applies to all who have grown up, left home, fallen in or out of love, and, above all, experienced what it means to be a foreigner, even within one's own family. --Alix Wilber About the Author:

Jhumpa Lahiri is the author of four works of fiction: Interpreter of Maladies, The Namesake, Unaccustomed Earth, and The Lowland; and a work of nonfiction, In Other Words. She has received numerous awards, including the Pulitzer Prize; the PEN/Hemingway Award; the PEN/Malamud Award; the Frank O’Connor International Short Story Award; the Premio Gregor von Rezzori; the DSC Prize for South Asian Literature; a 2014 National Humanities Medal, awarded by President Barack Obama; and the Premio Internazionale Viareggio-Versilia, for In altre parole.