Items related to The Savage Damsel and the Dwarf (Squire's Tales)

Morris, Gerald The Savage Damsel and the Dwarf (Squire's Tales)

The Savage Damsel and the Dwarf (Squire's Tales) 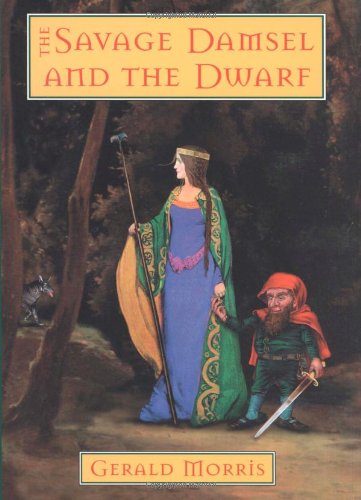 Lady Lynet, a strange dwarf named Roger, and Beaumains, a disheveled kitchen hand, learn that bravery and courage can be found in the most surprising places when they are faced with danger on their journey to save Lady Lynet's kingdom from an evil knight, in a suspenseful medieval adventure.

When Gerald Morris was in fifth grade he loved Greek and Norse mythology and before long was retelling the stories to his younger sister and then to neighborhood kids. He began carrying a notebook in which he kept some of the details related to the different stories. The joy he found in retelling those myths continued when he discovered other stories.

According to Gerald Morris, “I never lost my love of retelling the old stories. When I found Arthurian literature, years later, I knew at once that I wanted to retell those grand tales. So I pulled out my notebook . . . I retell the tales, peopling them with characters that I at least find easier to recognize, and let the magic of the Arthurian tradition go where it will.”

Gerald Morris lives in Wausau, Wisconsin, with his wife and their three children. In addition to writing he serves as a minister in a church.

Grade 6-9-A rollicking treatment of a lesser-known episode from Sir Thomas Malory's Le Morte D'Arthur. Teenaged Lady Lynet sets out for Camelot, looking for a champion to free her family's castle from the siege of an evil knight. Along the way, she befriends several mysterious companions, none of whom is exactly as he or she first appears. Scattered throughout Lynet's saga are droll, unusually modern portrayals of many familiar Arthurian characters. The heroine, nicknamed the Savage Damsel, is a take-charge kind of gal. Noble Sir Gareth appears as a "clothheaded ninny," whose turbocharged sense of honor forces him into an unnecessary duel with every knight he stumbles across, and brave Sir Lancelot has burned out on chivalry and admits he has become a media creation. The novel is also enjoyable for its good-natured spoofing of the conventions of its medieval setting. Knights of the Round Table avoid any tournament where the prize is a lady's hand in marriage, figuring there must be something wrong with her. Characters poke fun at one another's lofty, Maloryesque language. Also, some of the most courageous knights are shown to be none too bright, which explains why they risk their lives so readily. Although the story lacks the majesty of other tales closer to the heart of the Arthurian legend, it is great fun and will be enjoyed by fans of the genre.
Beth Wright, Fletcher Free Library, Burlington, VT
Copyright 2000 Reed Business Information, Inc.

1. The Savage Damsel and the Dwarf (Squire's Tales)

2. The Savage Damsel and the Dwarf (Squire's Tales)

3. The Savage Damsel and the Dwarf (Squire's Tales)