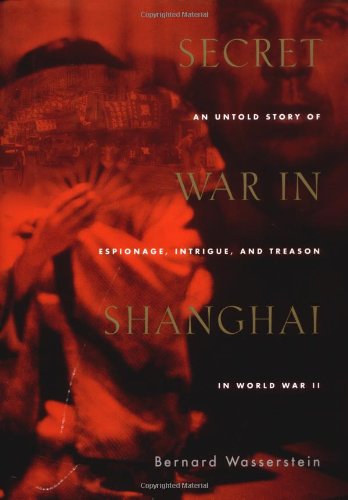 The story of wartime Shanghai unveils the savage political intrigue, diplomatic maneuvering, and sometimes deadly espionage that defined this city at the height of World War II, as foreign representatives converged on the city with its promise of cheap living and excitement. Tour.

Before World War II, Shanghai was China's leading commercial center and the most vital and glamorous of Asia's great cities. Against the background of civil war, Shanghai was administered by a consortium of international powers intent on exploiting a defenseless China. The city's seizure by the Imperial Japanese Army in December 1941 ended much of its glitter but not its role as a den of espionage, corruption, and vice. Bernard Wasserstein deftly sets the complex scene as the different powerbrokers, from ambassadors to gangsters, accommodated to the occupying Japanese. The cast of characters is bizarre, ranging from master spies such as Richard Sorge, whose coup was to warn Stalin of Germany's impending invasion, to imposters and petty secret agents living on their wits. People were not what they seemed: the author reveals the often sordid realities behind his protagonists' masks as they struggled for survival and each others' secrets. Richly researched from original sources, Secret War in Shanghai is particularly successful in painting vivid pictures of the different national groups that found themselves caught up in the city's vortex: destitute White Russians, refugees from Hitler's Germany, British taipans trying to hang onto their business interests. The story moves as fast as a racy novel, yet it is all meticulously documented fact. --John Stevenson

Shanghai during World War II was a killing field of brutal competition, ideological struggle, and murderous political intrigue. China's largest and most cosmopolitan city, the intelligence capital of the Far East, was a magnet for a corrupt and bizarrely colorful group of men and women drawn to the "Paris of the East" for its seductive promise of high living and easy money. Political and sexual loyalties were for sale to the highest bidder. Allied and Axis agents, criminal gangs, and paramilitary units under various flags waged secret, savage warfare. Espionage, lurid vice, subversion, and crime come together in a lethal concoction. Nowhere on earth was the twilight zone between politics and criminality better exemplified than in this glittering and dangerous place.

Secret War in Shanghai is the first book-length account of the little-known story of Shanghai's underground war. The widely respected historian Bernard Wasserstein has researched it entirely from original sources and uncovered startling new evidence of collaboration and treason by American, British, and Australian citizens. This remarkable depiction of complicity and betrayal is history at its most exciting and surprising.