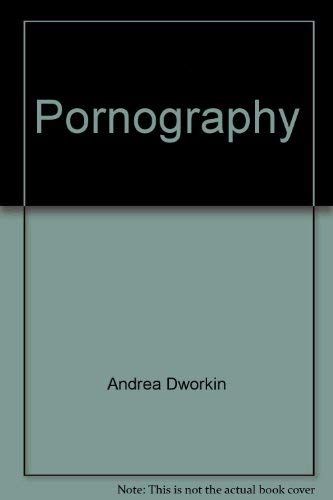 This volume presents a study of the damaging effect of pornography and its ramifications on society.

This strongly argued feminist case against pornography stirred tremendous controversy when first published in 1979, and has lost none of its bite during its several years out of print. Dworkin ( Letters from a War Zone ), who lobbies for municipal statutes declaring pornography a violation of women's civil rights, insists that pornography links sex and violence by incorporating violent domination of women as a key element of sexual fantasy: "Force in high-class pornography is romanticized . . . as if it were dance." Dworkin also takes what many consider to be an extreme position; she believes that pornography incites men to sexual violence. To support her thesis, she draws parallels between the life and writings of the Marquis de Sade and provides critical summaries of several contemporary pornographic works. Dworkin's style is intense, vivid and eloquent, infused with a sense of urgency.
Copyright 1989 Reed Business Information, Inc.

Book Description Putnam, 1981. Hardcover. Condition: VERY GOOD. Pages are intact and are not marred by notes or highlighting, but may contain a neat previous owner name. The spine remains undamaged. Seller Inventory # 0399126198_abe_vg

Book Description Putnam, 1981. Condition: Good. A+ Customer service! Satisfaction Guaranteed! Book is in Used-Good condition. Pages and cover are clean and intact. Used items may not include supplementary materials such as CDs or access codes. May show signs of minor shelf wear and contain limited notes and highlighting. Seller Inventory # 0399126198-2-4

Book Description Putnam, 1981. Hardcover. Condition: GOOD. Has little wear to the cover and pages. Contains some markings such as highlighting and writing. Seller Inventory # 0399126198_abe_gd