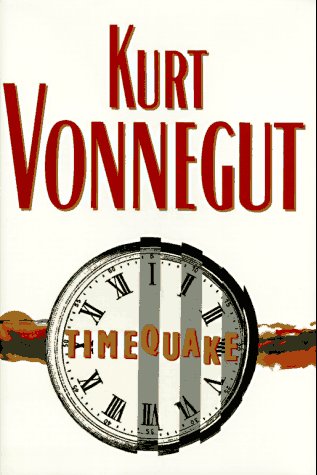 After the universe decides to back up ten years and all humans must live through the 1990s again, author Kurt Vonnegut finds himself trying to write a book called Timequake, which he knows he will never finish since he already did not finish it. 200,000 first printing.

Think of Timequake, Kurt Vonnegut's 19th and last novel (or so he says), as a victory lap. It's a confident final trot 'round the track by one of the greats of postwar American literature. After 40 years of practice, Vonnegut's got his schtick down cold, and it's a pleasure--if a slightly tame one--to watch him go through his paces one more time.

Timequake's a mongrel; it is half novel, half memoir, the project of a decade's worth of writer's block, a book "that didn't want to be written." The premise is standard-issue Vonnegut: "...a timequake, a sudden glitch in the space-time continuum, made everybody and everything do exactly what they'd done during past decades, for good or ill, a second time..." Simultaneously, the author's favorite tricks are on display--frequent visits with the shopworn science fiction writer Kilgore Trout, a Hitchcockian appearance by the author at the book's end, and frequent authorial opining on love, war, and society.

Kurt Vonnegut, one of the most acclaimed American writers of the past century, died in New York City on April 11, 2007. He was the New York Times bestselling author of fourteen novels, including such literary classics as Slaughterhouse-Five, Cat’s Cradle and God Bless You, Mr. Rosewater. Penguin Group (USA) was fortunate to publish several of Mr. Vonnegut’s books, including the novels Timequake and Hocus Pocus as well as a collection of short fiction, Bagombo Snuff Box.