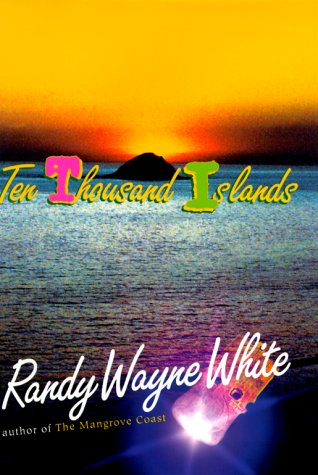 Fifteen years after a young girl unearths an ancient gold medallion and then mysteriously dies, Doc Ford investigates strange occurrences at the girl's home and concludes that a dangerous person is determined to find the medallion. 22,500 first printing.

Of all the Travis McGee wannabes who've appeared on the mystery scene since the death of John D. MacDonald, Randy Wayne White's Doc Ford, the marine biologist with an intentionally vague history of military espionage, comes closest to hitting the mark. In this seventh outing in a popular series that's never quite broken into bestsellerdom, Ford is finagled away from his beloved fish and his stilt house off Florida's Gulf Coast to investigate the grave robbing of a long-dead adolescent girl who had a remarkable gift for finding archaeological artifacts of a long-gone civilization of Calusa Indians. The centuries-old gold medallion that may have been buried with Dorothy Copeland has mysterious powers--at least, that's what a big Florida developer whose son is being groomed for high political office seems to believe. By the time Doc Ford starts investigating the incident, along with his oddly gifted friend Tomlinson (a druggie with a past as violent and mysterious as his own), more lives are at stake, including Doc's.

Ten Thousand Islands is based on a true story of multiple tragedies associated with the 1969 discovery of the medallion at the novel's center. But the complicated tale of mayhem and serial murder White weaves of it is all his own. Doc Ford is an increasingly interesting character whose love life takes up as many pages as the plot, but the community of Dinkin's Bay, with its fascinating and well-drawn minor characters, is as great a part of White's series as the denizens of Travis McGee's Fort Lauderdale marina were of MacDonald's. --Jane Adams

Randy Wayne White is the author of seventeen previous Doc Ford novels and four collections of nonfiction. He lives in an old house built on an Indian mound in Pineland, Florida.