Items related to The Beauty of Color

Iman The Beauty of Color 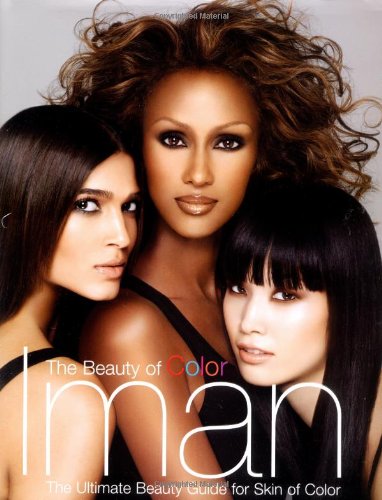 Outlines a program of skin care and makeup for women of color, drawing on the author's experience as a supermodel and founder of a top cosmetics line to explain how to tailor a beauty regime in accordance with a woman's particular skin tone and type. 150,000 first printing.

Iman , the daughter of an African diplomat, was born in Somalia. She was raised speaking five languages, and was studying political science at the University of Nairobi when she was discovered by photographer Peter Beard, who arranged for her to seek a modeling career in the United States. She quickly became the most successful black model and an international star on runways and in magazines. Iman remained at the top of her field for fourteen years, appearing in countless publications and advertising campaigns. In 1994 she started Iman Cosmetics for skin of color and in 2000 launched a second line, I-Iman Makeup. She is the author of I Am Iman, an autobiographical sketchbook of her working life. The mother of two daughters, she is married to musician/actor David Bowie.

Discovered when she was a university student in Nairobi, Kenya, in 1975 by photographer Peter Beard, Iman went on to become an international supermodel. To address the needs of women of color, she launched a line of cosmetics, Iman, in 1994, and with this beautifully illustrated coffee-table book geared to black, Hispanic, Middle Eastern and Asian women, and timed to coincide with the debut of her second cosmetic line, she's poised to become the voice of beauty for this underrepresented group of women. In a conversational tone, Iman shares solutions to basic makeup and skin care quandaries (how to use blush, test foundation and choose tools) and debunks myths (dark skinned women don't need sunblock, ethnicity determines skin color). Other sections show how to "get the look" from "Ghetto Fab" to "So Fresh So Clean." Gorgeous photographs of well-known faces (Salma Hayek, Tyra Banks, Ling) with personal tidbits of advice and real women makeovers, from teens to women over 50, round out the offerings. Fun and flirty, with a confidential, insider feel, this combination of celebrity and self-improvement, capped with artistic portraits of women famous and not, indicate another success for Iman.
Copyright © Reed Business Information, a division of Reed Elsevier Inc. All rights reserved.

THE BEAUTY OF COLOR