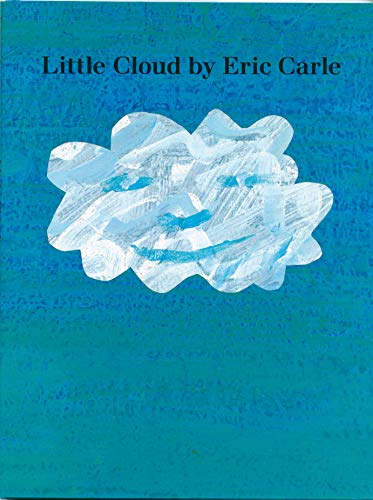 At last! Here's a brand-new board book edition of an Eric Carle picture book that's a favorite with littlest cloud gazers everywhere! Little Cloud likes to stand out from the crowd. When all the other clouds drift up, he goes his own way, changing shapes to become a sheep, an airplane, a shark and a funny clown. It's all lots of fun, but so is playing with friends. So this time, Little Cloud joins the crowd, gathering with his pals into one giant cloud. And then they rain! In Little Cloud, Eric Carle celebrates the possibilities of imagination with textured collages of sky-blue and white in a story that will encourage the youngest child to read clouds. Eric Carle lives in Northampton and Charlemont, MA.

A minor addition to Carle's lengthy list of child-captivating titles, this lean tale introduces a cloud that changes itself into a handful of shapes. Calling upon memories of objects it has seen, Little Cloud becomes a plane, a shark, trees, a rabbit and a clown before rejoining its peers. At this point they do what clouds are apt to do when they get together: "Then all the clouds changed into one big cloud and rained!" Popping out from a textured background of rich turquoise, Carle's luminous collage art features broad, swirling strokes reminiscent of fingerpainting. As minimalist as the text, these images may well inspire kids to cast more creative glances at the sky. Although the conceit is imaginative, the execution lacks the inventiveness and extra sparkle of such Carle classics as the "Very" quartet. Ages 2-6.
Copyright 1996 Reed Business Information, Inc.

Book Description Hardcover. Condition: new. Hardcover. At last Here&#039;s a brand-new board book edition of an Eric Carle picture book that&#039;s a favorite with littlest cloud gazers everywhere Little Cloud likes to stand out from the crowd. When all the other clouds drift up, he goes his own way, changing shapes to become a sheep, an airplane, a shark and a funny clown. It&#039;s all lots of fun, but so is playing with friends. So this time, Little Cloud joins the crowd, gathering with his pals into one giant cloud. And then they rain In Little Cloud, Eric Carle celebrates the possibilities of imagination with textured collages of sky-blue and white in a story that will encourage the youngest child to read clouds. Eric Carle lives in Northampton and Charlemont, MA. Every child loves to spend hours staring at the sky, picturing images in the clouds. Now, Eric Carle celebrates this pastime in a playful story told from a cloud&#039;s point of view. Through striking collage art and a simple text, Carle tells the tale of Little Cloud as he discovers all the wonderful shapes he can change into: a sheep, an airplane, and more! Shipping may be from multiple locations in the US or from the UK, depending on stock availability. Seller Inventory # 9780399230349

Shipping: US$ 11.45
From United Kingdom to U.S.A.
Destination, rates & speeds

Shipping: US$ 17.18
From United Kingdom to U.S.A.
Destination, rates & speeds