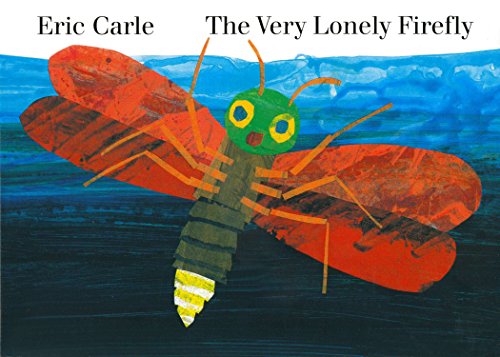 A VERY classic from Eric Carle, creator of The Very Hungry Caterpillar!

When a very lonely firefly goes out into the night searching for other fireflies, it sees a lantern, a candle, and the eyes of a dog, cat, and owl all glowing in the darkness. It even sees a surprise celebration of light. But it is not until it discovers other fireflies that it finds exactly what it's looking for--a surprise sure to bring smiles to anyone who turn the final page!

Lushly illustrated with Eric Carle's trademark vibrant collage art, soothingly told with a gentle read-aloud rhythm, and complete with a surprise sure to "light up" children's faces, The Very Lonely Firefly will fast become a storytime favorite. Read it with a flashlight in the dark or under the table--and watch those fireflies glow!

Many of Eric Carle's books begin with a small creature being born just as a great yellow sun rises. This time the hero is a firefly, and the inimitably Carle-ish cut-paper orange-and-yellow sun is setting. The firefly buzzes off in search of companionship, but keeps following other lights by mistake--a candle, a flashlight, a lantern--and these in turn are all leading in the direction of a fireworks display. Finally, the lonely firefly finds the friends it is seeking--a dozen or more other fireflies. This is one of a series of large (11.5 by 8.5 inches) format Carle books with a mechanical twist: in this case, the firefly's new group of friends start to flash (from tiny yellow bulbs embedded in the book) as you turn the last page. (The battery is replaceable.) (Baby to preschool) --Richard Farr

The Very Lonely Firefly board book

The Very Lonely Firefly board book Board book

The Very Lonely Firefly (Board Book)