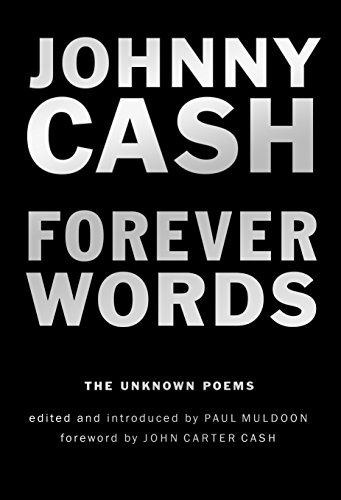 These never-before-published poems by Johnny Cash make the perfect gifts for music lovers and fans alike. Edited and introduced by Pulitzer Prize-winning poet Paul Muldoon with a foreword by John Carter Cash, this poetry collection is illustrated with facsimile reproductions of Cash’s own handwritten pages. Now an album with music by Rosanne Cash, Brad Paisley, Willie Nelson, Kacey Musgraves, Elvis Costello, and more.

Since his first recordings in 1955, Johnny Cash has been an icon in the music world. In this collection of poems and song lyrics that have never been published before, we see the world through his eyes and view his reflection on his own interior reality, his frailties and his strengths alike. In his hallmark voice, he pens verses about love, pain, freedom, and mortality, and expresses insights on culture, his family, his fame, even Christmas. Forever Words confirms Johnny Cash as a brilliant and singular American literary figure. His music is a part of our collective history, and here the depth of his artistry and talent become even more evident.

JOHNNY CASH (1932–2003) was an American icon and country music superstar. He performed everywhere from Folsom State Prison to the White House. In 1980 he became the youngest living person to be chosen for the Country Music Hall of Fame; he was inducted into the Nashville Songwriters Hall of Fame in 1977, the Rock & Roll Hall of Fame in 1992, and the Gospel Music Hall of Fame in 2010. A recipient of the Kennedy Center Honors as well as the National Medal of Arts, he won nineteen Grammy Awards, four of them posthumously.

PAUL MULDOON is the author of twelve collections of verse, including Moy Sand and Gravel, for which he won the 2003 Pulitzer Prize for Poetry. He is the Howard G. B. Clark Profes­sor at Princeton University, and between 1999 and 2004 he was Professor of Poetry at Oxford. Since 2007, Muldoon has been poetry editor of The New Yorker. He is a fellow of the Royal Soci­ety of Literature and of the American Academy of Arts and Letters.

“The Man in Black was also an incredibly productive poet who was just as happy to let his pen do the talking....Love, mortality, addiction, humor, spirituality, pain, wonder, hope, heartbreak, freedom and resignation all weave in and out of Cash's poetry – just as they did in his songs – in an attempt to paint the most accurate portrait of his true self.”
—Will Hodge, Rollingstone.com

“In some ways the poems mirror Cash’s songwriting, with terse ballads of outsiders in love, and parables drawn from the Bible...yet another look at a legend of American music.”
—Ben Sisario, The New York Times

“In retrospect, we should have assumed that outlaw country musician Johnny Cash was leading a double life as a secret poet.”
—Dennis DiClaudio, The A.V. Club