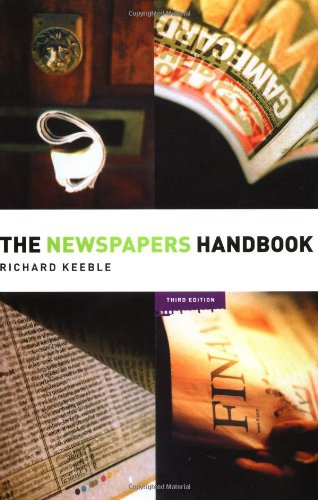 The Newspapers Handbook is the essential guide to working as a newspaper journalist. It examines the ever-changing, everyday skills of newspaper reporting and explores the theoretical, ethical, moral and political dimensions of a journalist's job.
The Newspapers Handbook encourages a critical approach to newspaper practice. Thoroughly rewritten for the third edition and using a range of new examples from tabloid and broadsheet newspapers, non-mainstream and local and regional publications, Richard Keeble examines key journalistic skills such as the art of interviewing, news reporting, reviewing, freelancing and feature writing. Newly updated chapters from Henry Clother, David Northmore and John Turner explore the specialisms of covering the courts, investigative journalism and local government reporting.
The Newspapers Handbook includes:
* Interviews with journalists about their working practices
* Examples of writing from a range of recent publications
* A guide to training and career opportunities
* The importance of new technologies for the newspaper industry
* An updated glossary of key terms and a revised bibliography.

Richard Keeble is director of undergraduate studies in the Department of Journalism at City University, London and a former editor of The Teacher. He is the author of Ethics for Journalists.

'The original Newspapers Handbook became an essential text for students of journalism, at the same time intelligent and practical. Since then journalism has become ever more popular as a career choice and ever more under the spotlight in terms of its own standards and the central role it plays in modern society. So the new edition is timely, with its highly relevant ethics and internet chapters, and the updating of content throughout. Keeble holds to the unfashionable view that journalism can be principled and influential, despite today's patterns of ownership and bitter competition. His book is an important contribution to tomorrow's journalistic standards.' - Peter Cole

'To my knowledge, there has never been a handbook for journalists quite like Richard Keeble's meticulous and loving work - I say loving because the author clearly has a passion for informed, honest and humane journalism. I predict, and hope, that many young journalists will be inspired by this book to practise just that.' - John Pilger