Items related to The Politics of Contemporary Spain (Routledge/Canada... 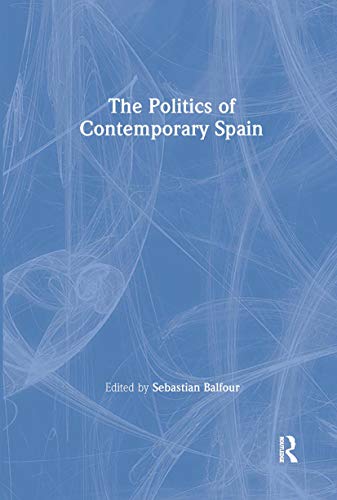 While Spain is now a well-established democracy closely integrated into the European Union, it has suffered from a number of severe internal problems such as corruption, discord between state and regional nationalism, and separatist terrorism.

The Politics of Contemporary Spain charts the trajectory of Spanish politics from the transition to democracy through to the present day, including the aftermath of the Madrid bombings of March 2004 and the elections that followed three days later. It offers new insights on the main political parties and the political system, on the monarchy, corruption, terrorism, regional and conservative nationalism, and on Spain's policies in the Mediterranean and the EU. It challenges many existing assumptions about politics in Spain, reaching beyond systems and practices to look at identities, political cultures and mentalities. It brings to bear on the analysis the latest empirical data and theoretical perspectives.

Sebastian Balfour is Professor of Contemporary Spanish Studies at the London School of Economics and Political Science. His research interests cover the history and politics of twentieth century Spain. Recent publications include: The End of the Spanish Empire 1898-1923 and Deadly Embrace. Morocco and the Road to the Spanish Civil War.

'A treasure trove of empirical data on everything from the monarchy to the several "nationalisms" that insist, in their different ways, on separate cultural, political and linguistic identity.'

'Succinctly written analyses of corruption, of state terror covertly practised against the terrorists in the 1980s, of Opus Dei and its machinations, and a truly brilliant analysis of conservative Spanish nationalism since the early 1990s by historian Xose-Manoel Seixas - all that and much more besides make this book an invaluable compendium of the political contradictions, wonders and waywardness of western Europe's most variegated country.'

1. THE POLITICS OF CONTEMPORARY SPA