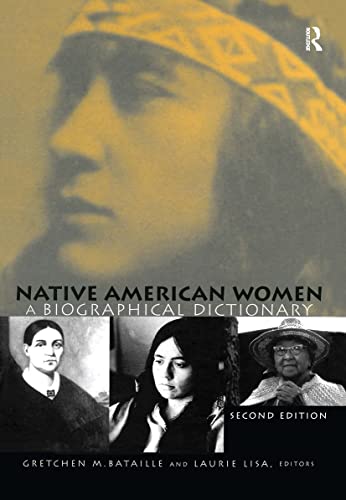 This A-Z reference contains 275 biographical entries on Native American women, past and present, from many different walks of life. Written by more than 70 contributors, most of whom are leading American Indian historians, the entries examine the complex and diverse roles of Native American women in contemporary and traditional cultures. This new edition contains 32 new entries and updated end-of-article bibliographies. Appendices list entries by area of woman's specialization, state of birth, and tribe; also includes photos and a comprehensive index.

This second edition of Native American Women is much enlarged over the first edition, published by Garland in 1993. As always with works by Bataille, who has been writing about native Americans for nearly 25 years, great attention has been paid to detail, and the list of contributors is a veritable who's who of persons working in the field of Native American studies.

The volume contains A-Z biographies of more than 270 women with diverse roles within their cultures, from fur trader Sally Ainse (c. 1728-1823) to lawyer Melody McCoy (1960-) and from traditional medicine practitioner Coocoochee (early 1740s-post 1800) to tribal leader Wilma Mankiller (1945-). Entries are generally less than a page in length and conclude with bibliographic references. The volume has four valuable appendixes: "Primary Areas of Specialization," "Decades of Birth," "State/Province of Birth," and "Tribal Affiliation." The index is a little slim and does not include many of the names and organizations mentioned within the entries. Less than one tenth of the entries have illustrations. The bibliography has citations for several new items published since 1993.

Overall, this volume is exceptional. It offers more than twice the entries of Liz Sonneborn's A to Z of Native American Women (Facts On File, 1998), although Sonneborn's entries are generally longer and include more illustrations. Recommended for academic libraries as well as public and high-school libraries that need a new resource in this area. RBB
Copyright © American Library Association. All rights reserved

Shipping: US$ 43.62
From United Kingdom to U.S.A.
Destination, rates & speeds