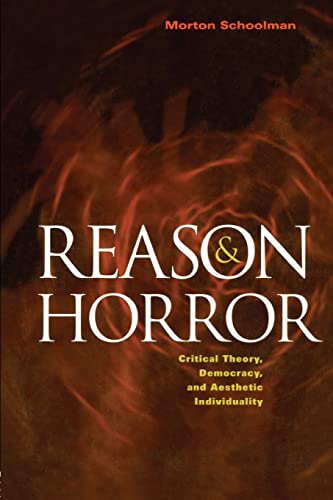 Morton Schoolman develops a fascinating and entirely new interpretation of the work of Horkenheimer and Adorno.

Morton Schoolman is Professor of Political Science at SUNY Albany, and the author of The Imaginary Witness: The Critical Theory of Herbert Marcuse.

"Have you bumped into moralists who condemn the 'aestheticization' of ethics and politics? Schoolman shows how they cut off their noses to spite their faces. "Reason and Horror is thought provoking in its readings of Adorno and Nietzsche, and captivating in its uses of Whitman and Tocqueville. This is a lively and engaging work.."
-"William E. Connolly, Professor of Political Science, Johns Hopkins University
..."In a fascinating new study, Morton Schoolman marshals novel readings of each theorist to argue for the value of a democratic policy in creating and sustaining what he terms "aesthetic individuality," an ehical disposition toward the other that values difference as a resource in the ongoing project of forming the self.."
-Shane Gunster, Ryerson University
""Reason and Horror has much to offer, and its core principle of aesthetic individuality offers an intriguing discussion of relevance of aesthetics to questions of ethics and politics.."
-"Shane Gunster, Ryerson University
"A provocative contribution to current efforts to better understand how the aesthetic dimension relates to ethical-political life. Schoolman takes us down a fascinating and surprising path toward the articulation of a notion of 'aesthetic individuality' that draws as much upon Horkheimer and Adorno as on Walt Whitman and de Tocqueville.."
-"Stephen K. White, Professor Political Science, University of Virginia
""Reason and Horror is not only instructive, it's stimulating. It stirs by its articulateness, by its profundity, and by a general spiritedness. I found the treatment of the Adorno-Nietszche aesthetics connection to be a triumph. Anyone interested in political, social, orcultural theory must find the work fascinating and enriching. Morton Schoolman has written a major book.."
-George Kateb, Professor of Political Science, Princeton University

Shipping: US$ 17.90
From United Kingdom to U.S.A.
Destination, rates & speeds