Items related to Imagine Nation: The American Counterculture of the...

Imagine Nation: The American Counterculture of the 1960's and 70's 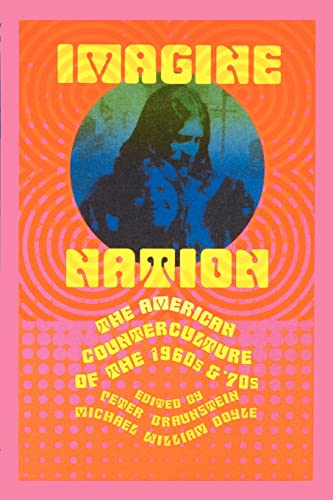 Amidst the recent flourishing of Sixties scholarship, Imagine Nation is the first collection to focus solely on the counterculture. Its fourteen provocative essays seek to unearth the complexity and rediscover the society-changing power of significant movements and figures.

Peter Braunstein is a journalist and cultural historian based in New York City. He writes about fashion, film, celebrity, the 1960s, music, technology, and pop culture for such publications as the Village Voice, Forbes, American Heritage, the Chronicle of Higher Education, Women's Wear Daily, W, and culturefront. He received his M.A. from New York University in 1992, having written a thesis on the Haight-Ashbury counterculture.
Michael William Doyle worked in the new-wave food co-op movement during the 1970s while living communally on an organic farm he helped found in Wisconsin. He went on to earn a B.A. at the University of Wisconsin-Madison (1989), and a Ph.D. at Cornell University (1997). He is currently Assistant Professor of History at Ball State University at Muncie, Indiana. He is the author of Free Radicals: The Haight-Ashbury Diggers and the American Counterculture in the 1960s.

"Braunstein (journalist and independent scholar) and Doyle (Ball State Univ.) offer a historically sound survey of US counterculture of the 1960s and 1970s...Many of the chapters are likely to become assigned reading in courses on cultural history. Strongly recommended for all academic collections.."
-K. Toloyan, Wesleyan University, for "CHOICE
..."a landmark study."
-Theodore Roszak, "San Francisco Chronicle, December 23, 2001
..."the essays do a fine job of showing the ways in which women, blacks, American Indians and gays lived out the full implications of challenging the subliminal assumptions of mainstream culture."
-Theodore Roszak, "San Francisco Chronicle, December 23, 2001
"" Imagine Nation is an important corrective to the now-fashionable view that the counterculture represented little more than the further commodification of American society. This provocative collection helps to reveal the centrality of subcultures in American history since the the 1950s."
- Alice Echols, Author of "Shaky Ground: The Sixties and Its Aftershocks.
"How thrilling to see the maelstrom of the Sixties subjected to trenchant analysis and its various ideologies and expressions compared and contrasted. These scholar-detectives are so sensitive to the mind of the times that I suspect many saw action on the same streets I and my friends did. I think they got it right.."
-Peter Coyote, Actor and Writer, Author of" Sleeping Where I Fall.

5. Imagine Nation: The American Counterculture of the 1960's and 70's (Paperback)