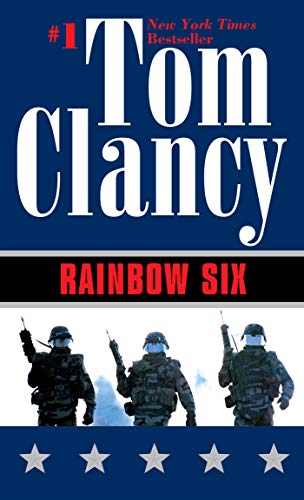 In this #1 New York Times bestselling John Clark thriller, author Tom Clancy takes readers into the shadowy world of anti-terrorism and gets closer to reality than any government would care to admit...

Ex-Navy SEAL John Clark has been named the head of Rainbow, an international task force dedicated to combating terrorism. In a trial by fire, Clark is confronted with a violent chain of seemingly separate international incidents. But there is no way to predict the real threat: a group of terrorists like none the world has ever encountered, a band of men and women so extreme that their success could literally mean the end of life on earth as we know it.

No one would have blamed David Dukes if he had declined reading for Tom Clancy's Rainbow Six. Not only is "Rainbow" a melting pot of secret-agent patois, but the 700-page-plus book version runs at a rampant pace--this despite the usual wealth of Clancy detail. But actor and audio pro Dukes (and the editor responsible for condensing the script onto six hours of tape) handles this daunting task admirably, applying a steady--but not urgent--Everyman's tone and imparting a sense that we're hearing the whole story. Listeners may want more, but will be satiated with this abridged rendition.

Dukes also bounces seamlessly among dialects, giving distinct but easy-to-understand voices to Rainbow, a colorful cast of international good guys assembled to save the world from terrorism. The group is led by a sometimes violent but justice-minded ex-CIA agent, John Clark, who is proof that Clancy can paint a dark protagonist as vividly as his good knight, Jack Ryan. But Rainbow Six is an equally bright showcase for reader Dukes, who, like Clark, is bent on providing justice. Dukes's reading gives justice to the abridged form. (Running time: six hours, four cassettes) --Rob McDonald

4 cassettes / 6 Hours
Read by David Dukes
(also available on CD)
Tom Clancy's most shocking story to date - and closer to reality than any government would care to admit.

Over the course of nine novels, Tom Clancy's "genius for big, compelling plots" and his "natural narrative gift" (The New York Times Magazine) have established him as one of the preeminent storytellers of our time.  In his new and most extraordinary novel, Rainbow Six, Clancy goes beyond anything he has done before.

At its heart is John Clark, the ex-Navy SEAL of Without Remorse, a master of secret operational missions, and newly named the head of an international task force dedicated to combating terrorism.  Clark is looking forward to sinking his teeth into a new mission, but the opportunities start coming faster than anyone could have expected; an incident at a Swiss bank, the kidnapping of an international trader in Germany, a  terrible raid on an amusement park in Spain.

Each episode seems separate, yet the timing disturbs Clark.  Is there a connection?  He tries to figure out where all this activity is heading, but there is no way to predict the real threat: a group of terrorists like none the world has ever encountered, a group so extreme that their success could literally mean the end of life on this earth as we know it.

This is Clancy at his best - and there is none better.