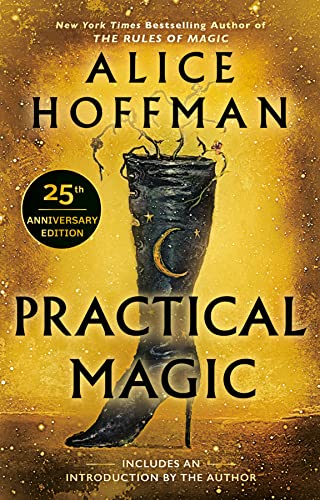 The Owens sisters confront the challenges of life and love in this bewitching novel from the New York Times bestselling author of The Rules of Magic and The World That We Knew.

For more than two hundred years, the Owens women have been blamed for everything that has gone wrong in their Massachusetts town. Gillian and Sally have endured that fate as well: as children, the sisters were forever outsiders, taunted, talked about, pointed at. Their elderly aunts almost seemed to encourage the whispers of witchery, with their musty house and their exotic concoctions and their crowd of black cats. But all Gillian and Sally wanted was to escape. One will do so by marrying, the other by running away. But the bonds they share will bring them back—almost as if by magic...

“Splendid...Practical Magic is one of [Hoffman's] best novels, showing on every page her gift for touching ordinary life as if with a wand, to reveal how extraordinary life really is.”—Newsweek

“[A] delicious fantasy of witchcraft and love in a world where gardens smell of lemon verbena and happy endings are possible.”—Cosmopolitan

For most adults, fairy tales are among the childish things we've put away. Alice Hoffman, however, feels differently. Practical Magic starts out as a tale of Gillian and Sally Owens, two orphaned girls whose aunts are witches--of a mild sort. For the past two centuries, Owens women have been blamed for all that has gone wrong in their Massachusetts town, ever since their ancestor arrived, rich, independent, and soon accused of theft: "And then one day, a farmer winged a crow in his cornfield, a creature who'd been stealing from him shamelessly for months. When Maria Owens appeared the very next morning with her arm in a sling and her white hand wound up in a white bandage, people felt certain they knew the reason why." The aunts are daily ostracized by the same upstanding citizens who sneak to their house at night for magical love cures. To the sisters they are for the most part benevolently absent, though their bell, book, and candle routine makes life a torment for Gillian, beautiful and blonde and lazy, and Sally, who's all too responsible. But when one of the aunts' cures works too well, ending as a curse, the dangers of real love become all too clear. In Hoffman's world being bewitched, bothered, and bewildered is no mere metaphor--and neither is desire. The elbows of one enamored man pucker a linoleum counter, another walks around with singed cuffs. It's difficult to catch the author's power in brief quotes. She needs space and increment to build her exquisite variations of vision and reality, her matter-of-fact announcements of the preternatural. Practical Magic again and again makes one recall the thrill of hearing at bedtime, "Now will I a tale unfold..." --Kerry Fried

Alice Hoffman is the author of more than thirty works of fiction, including The World That We Knew, The Rules of Magic, Practical Magic, The Marriage of Opposites, The Red Garden, the Oprah’s Book Club selection Here on Earth, The Museum of Extraordinary Things, and The Dovekeepers. She lives near Boston.