Items related to The Tale of Hill Top Farm: The Cottage Tales of Beatrix...

The Tale of Hill Top Farm: The Cottage Tales of Beatrix Potter 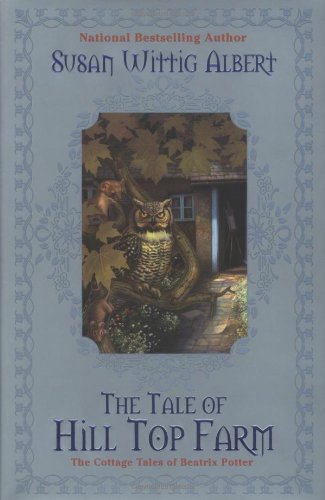 After purchasing a farm in the beautiful Lake District of England, the animal lover attempts to make friends among her fellow villagers, while her animal companions find themselves caught up in solving a baffling mystery, in the first volume in a new mystery series inspired by the life of Beatrix Potter.

Susan Wittig Albert grew up on a farm in Illinois and earned her Ph.D. at the University of California at Berkeley. A former professor of English and a university administrator and vice president, she is the author of the China Bayles Mysteries, the Darling Dahlias Mysteries, and the Cottage Tales of Beatrix Potter. Some of her recent titles include Widow’s Tears, Cat’s Claw, The Darling Dahlias and the Confederate Rose, and The Tale of Castle Cottage. She and her husband, Bill, coauthor a series of Victorian-Edwardian mysteries under the name Robin Paige, which includes such titles as Death at Glamis Castle and Death at Whitechapel.

Adult/High School–This novel is the first of a proposed eight-volume mystery series and, as might be expected, a great deal of time is spent introducing the characters who live in Near Sawrey, England, where Beatrix Potter has recently bought the farm of the title. This rather curious story, in which all the animals interact and speak to one another, opens with a death, strictly in the "cozy" category; however, the first eyewitness testimony comes some 60 pages later, and from a cat at that. The book comes "fully loaded" with an author's note, a cast of characters (actual beings distinguished from fictional), historical notes, a map, resources, recipes, and a glossary. Keeping track of all of the villagers plus all of the "talking" animals (never mind trying to keep track of clues–this is a mystery after all) can become a chore. All that said, Tale is endearing and worth the work for most readers. The English country village resonates with charm and humor, and sleuth Beatrix positively shines. When the animals or children appear, the story gains an even more vivid voice. Teen fans of Potter or any book in which animals are the protagonists will find this mystery appealing.–Jane Halsall, McHenry Public Library District, IL
Copyright © Reed Business Information, a division of Reed Elsevier Inc. All rights reserved.

1. The Tale of Hill Top Farm: The Cottage Tales of Beatrix Potter

2. The Tale of Hill Top Farm: The Cottage Tales of Beatrix Potter

3. The Tale of Hill Top Farm: The Cottage Tales of Beatrix Potter