Items related to Let There Be Blood: A Lord Ambrose Historical Mystery... 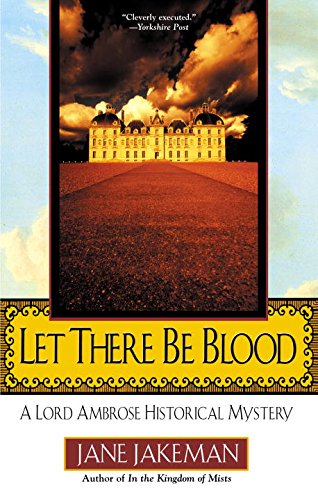 In the Kingdom of Mists showcased the talent of Jane Jakeman. In its wake comes the first of the Lord Ambrose historical mystery series, a "cleverly executed" (Yorkshire Post) tale of turn-of-the-last-century murder-and, perhaps worse, wrongful blame.

Lord Ambrose has returned to England from the battlefields of Greece to heal his wounds in the peace and quiet of his country mansion. But when a nearby farmer and his son are shot dead, and the villagers accuse a local gypsy, Ambrose must attend to the matter before he can rest.

A trip to the farmer's house reveals some very strange facts: the new widow appears to have a dangerous addiction to laudanum-and the governess's expensive dress is soaked in blood. The young woman's eyes bespeak dark secrets-and Ambrose has an eerie suspicion that these first two murders will not be the last.

Jane Jakeman is a well-known journalist and art historian and has worked for Oxford University Press. She is also the author of two 19th-century novels starring Lord Ambrose, The Egyptian Coffin and Let There Be Blood

British author Jakeman (In the Kingdom of Mists) introduces an intriguing Byronic hero in this first of a new series with stylistic overtones evocative of the Brontë sisters. Scarred by wounds received in the Greek fight for independence, Lord Ambrose returns in the summer of 1830 to Malfine, his ancestral West Country home, to live as a recluse with only his Greek manservant for company. As lord of the manor, he is forced out of seclusion to investigate the shooting murders of one of his tenant farmers and the farmer's son. Curiously, Ambrose finds the farmer's young widow has a predilection for opiates, while the alluring governess to the farmer's grandson has suspicious bloodstains on her costly dress. Jakeman's prose is dark and brooding at the onset, mirroring her protagonist's mood, but lightens as Ambrose, who will remind readers of Mr. Rochester, becomes more involved in the world around him. Secondary characters are also full of surprises, revealing hidden depths. The carefully constructed plot provides an illuminating glimpse of the years between the self-indulgence of the Regency and the rigid propriety of the Victorians. This series has been well received in Britain, and should be here as well.
Copyright © Reed Business Information, a division of Reed Elsevier Inc. All rights reserved.

1. Let There Be Blood

3. LET THERE BE BLOOD: A LORD AMBRO