Items related to Thinking the Twentieth Century: Intellectuals and Politics... 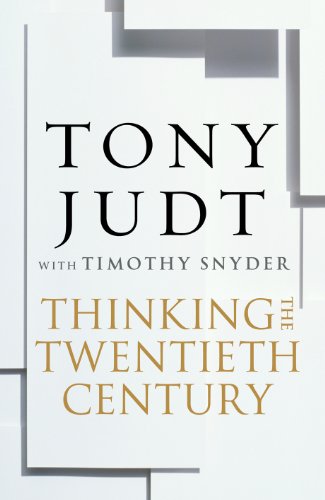 Tony Judt was educated at King's College, Cambridge, and the Ecole Normale Superieure, Paris, and taught at Cambridge, Oxford and Berkeley. He was the Erich Maria Remarque Professor of European Studies at New York University, as well as the founder and director of the Remarque Institute, dedicated to creating an ongoing conversation between Europe and America. The author or editor of fourteen books, Professor Judt was a frequent contributor to The New York Review of Books, the Times Literary Supplement, The New Republic, The New York Times and many journals across Europe and the United States. Professor Judt is the author of The Memory Chalet, Ill Fares the Land, Reappraisals: Reflections on the Forgotten Twentieth Century and Postwar: A History of Europe Since 1945, which was one of the New York Times Book Review's Ten Best Books of 2005, the winner of the Council on Foreign Relations Arthur Ross Book Award and a finalist for the Pulitzer Prize. He died in August 2010 at the age of sixty-two. Timothy Snyder studied at Brown and Oxford, held fellowships in Paris, Warsaw and Vienna and at Harvard, and is a professor of history at Yale. He is the author of five award-winning books of European history; the most recent of which, Bloodlands: Europe Between Hitler and Stalin, was named a book of the year by more than ten publications and is being translated into more than twenty languages.

''. . . The two authors range over the entire 20th century, focusing on the ideas that shaped it rather than events . . . Essential reading for anyone who purports to be well educated.'' --Library Journal

Book Description Paperback. Condition: Very Good. The book has been read, but is in excellent condition. Pages are intact and not marred by notes or highlighting. The spine remains undamaged. Seller Inventory # GOR005345060

Book Description Penguin Random House, 2012. Condition: Good. 1st Edition. Ships from the UK. Former Library book. Shows some signs of wear, and may have some markings on the inside. Seller Inventory # 11431210-6

Book Description William Heinemann, 2012. Condition: Good. This is an ex-library book and may have the usual library/used-book markings inside.This book has hardback covers. In good all round condition. Dust Jacket in fair condition. Please note the Image in this listing is a stock photo and may not match the covers of the actual item,850grams, ISBN:9780434017423. Seller Inventory # 7972666

Shipping: US$ 20.60
From United Kingdom to U.S.A.
Destination, rates & speeds

Book Description William Heinemann / Random House, London, 2012. Hard Cover. Condition: Near Fine. Dust Jacket Condition: Very Good. First British. 414 pp. Light wear to upper edges of unclipped dustjacket. Some tanning to edges of text block. All else as new. Works Discussed; Index. "The 20th century comes to life as an age of ideas -- a time when, for good for for ill, the thoughts of the few reigned over the lives of the many. Judt presents the triumphs and the failures of prominent intellectuals, adeptly explaining both their ideas and the risks of their political commitments." Size: Octavo. Seller Inventory # 005167

Shipping: US$ 27.27
From United Kingdom to U.S.A.
Destination, rates & speeds