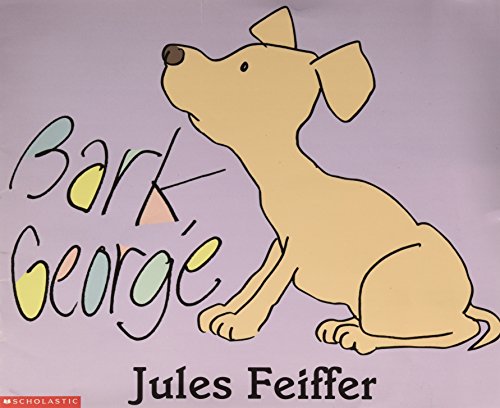 When George's mother tells her son to bark, he meows. She patiently explains that "Cats go meow. Dogs go arf. Now, bark, George." But he quacks! Then oinks. Then moos. Becoming less patient and more exasperated, George's mom takes him to the vet, who reaches deep down inside the errant pup, and, much to everyone's surprise, pulls out a cat! Then a duck, a pig, and finally a cow. George is cured, and barks at last! On the way home, his proud mother wants to show off her convincingly doglike son to everyone on the street. But when she says, "Bark, George," he simply says, "Hello." This is the simplest offering yet from Jules Feiffer--creator of the delightful picture books Meanwhile and I Lost My Bear. Still, his cartoonish drawings are intensely expressive, alive, and hilarious. None of it will be lost on the youngest of readers who will giggle every time George fails to bark, every time the vet extracts a new animal, and at the final punchline, too. In a world of often overdone or underdone picture books, this fine Feiffer creation is just right.