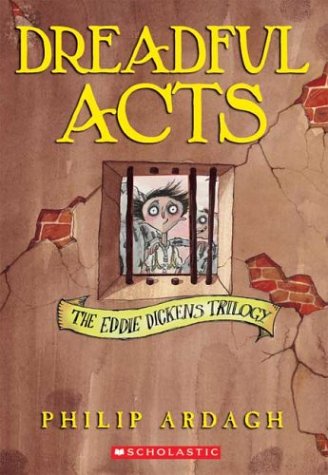 Ah, life is never easy for Eddie Dickens. In this brave and hearty installment of the Eddie Dickens Trilogy, he narrowly avoids being blown up, trampled by horses, hit by a hot-air balloon, and arrested - only to find himself falling heels over head for a girl with a face like a camel's. He also falls into the hands of a murderous gang of escaped convicts. They have "a little job" for him to do. All the old favorites are here - including Mad Uncle Jack and Malcolm (or it is Sally?) the stuffed stoat - along with some worrying-looking new ones. A good time will be had by all. Except Eddie.

Oh, fans of Snicket's Series of Unfortunate Events, are you ready for British author Philip Ardagh's Eddie Dickens Trilogy? Snicket-ites will find it impossible to ignore the similarities to their beloved series about three orphans who undergo much hardship with little hope of relief. For one thing, Ardagh, like Snicket, enjoys spinning an over-the-top Gothic tale. Also, he assumes the voice of a personable, mostly omniscient, sometimes pedantic narrator who is eager to explain the origins of the terms he uses, such as "pitch-black," "unbridled joy," and "nailing" as well as offering a running commentary on the development of his story as he is telling it. One big difference is that this trilogy is set "in England sometime during the reign of Queen Victoria (who sat on the throne for more than sixty-three years so let's hope she had a cushion...)." And of course, Ardagh has a sense of humor all his own and an overriding cheerfulness that Snicket likes to snuff the moment it might surface.

As readers learn in the first book, A House Called Awful End, Eddie Dickens lives in a house called Awful End with his parents, his great-uncle, and Mad Aunt Maud. This second novel, Dreadful Acts, begins one fateful night when Uncle Jack wakes Eddie up to show him that a driverless hearse (drawn by horses) is parked in their driveway. Imagine their surprise to discover that the hearse's coffin contains a living man, the Great Zucchini, a famous escapologist (but definitely not an Egyptologist). Add to the mix the sudden crash-landing via hot-air balloon by the camel-faced, petticoated Daniella who makes Eddie dribble and act like a simpleton, a bunch of "peelers" (police), and a few escaped convicts, and the plot thickens. Oddball characters, compassionately sketched, distinguish this funny, endearingly quirky read. David Roberts's spidery illustrations of pointy-faced people, generously sprinkled throughout the book, are quite wonderful in a rather Quentin Blake-y way. A four-page glossary at the close of the book explains terms such as box hedge, cream tea, and creosote. Stay tuned for the dramatic trilogy conclusion Terrible Times. (Ages 11 and older) --Karin Snelson

In this eagerly awaited sequel to A House Called Awful End, Eddie Dickens narrowly avoids being blown up, trampled by horses, hit by a hot-air balloon, and arrested--only to find himself falling head over heels for a girl with a face like a camel's and into the hands of a murderous gang of escaped convicts, up on the misty moors, who have a "little job" for him to do.

All the old favorites are here--including Mad Uncle Jack and Malcolm (or is it Sally?) the stuffed stoat--along with some worrying-looking new ones. Beware!