Items related to The Invention of Hugo Cabret

The Invention of Hugo Cabret 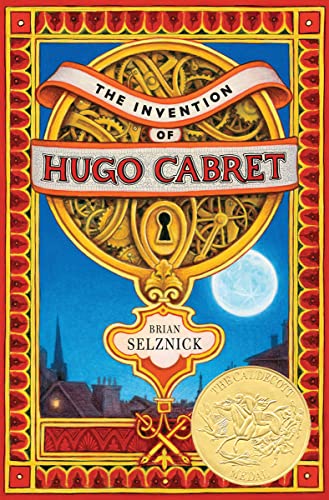 Orphan, clock keeper, and thief, Hugo lives in the walls of a busy Paris train station, where his survival depends on secrets and anonymity. But when his world suddenly interlocks with an eccentric, bookish girl and a bitter old man who runs a toy booth in the station, Hugo's undercover life, and his most precious secret, are put in jeopardy. A cryptic drawing, a treasured notebook, a stolen key, a mechanical man, and a hidden message from Hugo's dead father form the backbone of this intricate, tender, and spellbinding mystery.

Brian Selznick is the Caldecott Medal-winning creator of the New York Times bestsellers The Invention of Hugo Cabret, adapted into Martin Scorsese’s Oscar-winning Hugo, Wonderstruck, adapted into Todd Haynes's eponymous movie, and The Marvels. Among the celebrated picture books Selznick has illustrated are the Caldecott Honor Book The Dinosaurs of Waterhouse Hawkins by Barbara Kerley, and the Sibert Honor Book When Marian Sang by Pam Muñoz Ryan. His books appear in over 35 languages. He has also worked as a bookseller, a puppeteer, and a screenwriter. He divides his time between Brooklyn, New York and San Diego, California.

Inside a Paris train station in 1932, a small boy named Hugo Cabret secretly keeps all the clocks running. Like the workings of a clock, the parts of this intriguing story interlock, and the audio program is a marvel in itself. Jeff Woodman narrates Hugo's story, which introduces listeners to an automaton, a mechanical figure that writes and draws, and the early science fiction films of Georges M li s. Woodman clearly captures Hugo and his friends as they try to discover the secrets of an old man. Sound sequences are placed within the narrative where in the print edition of the book a series of illustrations occurs. A bonus DVD accompanies the set, and it's a dynamic "extra." The disc contains not just a filmed interview with Selznick, in which he talks about his writing and illustration process, but also images of the actual illustrations. This wholly original integration of audio narration, soundscapes, illustration, and author discussion is an experience listeners of all ages should not miss. Discovering how the intricate puzzle of elements fits together like clockwork will provide repeated listenings to figure out. R.F.W. Winner of AudioFile Earphones Award © AudioFile 2007, Portland, Maine-- Copyright © AudioFile, Portland, Maine

1. The Invention of Hugo Cabret

2. Invention of Hugo Cabret : A Novel in Words and Pictures

3. The Invention of Hugo Cabret

4. THE INVENTION OF HUGO CABRET

5. THE INVENTION OF HUGO CABRET

6. THE INVENTION OF HUGO CABRET

7. THE INVENTION OF HUGO CABRET

8. THE INVENTION OF HUGO CABRET

9. THE INVENTION OF HUGO CABRET

10. THE INVENTION OF HUGO CABRET