Items related to The Arrival 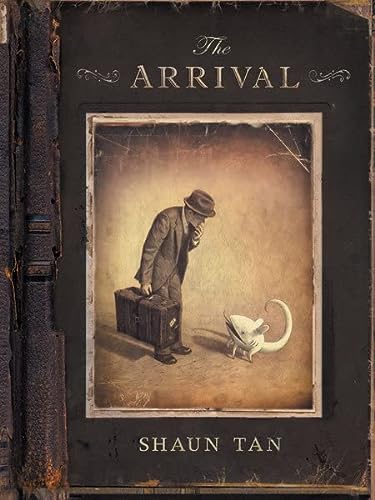 "Tan's lovingly laid out and masterfully rendered tale about the immigrant experience is a documentary magically told." -- Art Spiegelman, author of Maus

"A magical river of strangers and their stories!" -- Craig Thompson, author of Blankets

"A shockingly imaginative graphic novel that captures the sense of adventure and wonder that surrounds a new arrival on the shores of a shining new city. Wordless, but with perfect narrative flow, Tan gives us a story filled with cityscapes worthy of Winsor McCay." -- Jeff Smith, author of Bone

About the Author:
Shaun Tan is the New York Times bestselling author of The Arrival, Tales from Outer Suburbia, Tales from the Inner City, Rules of Summer, and The Singing Bones. He received the Astrid Lindgren Memorial Award in 2011 and won an Academy Award for the adaptation of his picture book The Lost Thing (from Lost & Found: Three by Shaun Tan). Shaun lives in Melbourne, Australia.
From Booklist:
*Starred Review* Recipient of numerous awards and nominations in Australia, The Arrival proves a beautiful, compelling piece of art, in both content and form. Tan (The Lost Thing, 2004) has previously produced a small body of off-kilter, frequently haunting stories of children trapped in surreal industrial landscapes. Here, he has distilled his themes and aesthetic into a silent, fantastical masterpiece. A lone immigrant leaves his family and journeys to a new world, both bizarre and awesome, finding struggle and dehumanizing industry but also friendship and a new life. Tan infuses this simple, universal narrative with vibrant, resonating life through confident mastery of sequential art forms and conventions. Strong visual metaphors convey personal longing, political suppression, and totalitarian control; imaginative use of panel size and shape powerfully depicts sensations and ideas as diverse as interminable waiting, awe-inspiring majesty, and forlorn memories; delicate alterations in light and color saturate the pages with a sense of time and place. Soft brushstrokes and grand Art Deco–style architecture evoke a time long ago, but the story's immediacy and fantasy elements will appeal even to readers younger than the target audience, though they may miss many of the complexities. Filled with subtlety and grandeur, the book is a unique work that not only fulfills but also expands the potential of its form. Karp, Jesse

The Arrival (Hardback or Cased Book)