Items related to Gone for Good 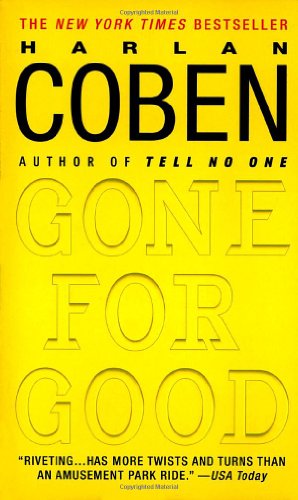 As a boy, Will Klein had a hero: his older brother, Ken. Then, on a warm suburban night in the Kleins’ affluent New Jersey neighborhood, a young woman—a girl Will had once loved—was found brutally murdered in her family’s basement. The prime suspect: Ken Klein. With the evidence against him overwhelming, Ken simply vanished. And when his shattered family never heard from Ken again, they were sure he was gone for good.

Now eleven years have passed. Will has found proof that Ken is alive. And this is just the first in a series of stunning revelations as Will is forced to confront startling truths about his brother, and even himself. As a violent mystery unwinds around him, Will knows he must press his search all the way to the end. Because the most powerful surprises are yet to come.

"The ugliest truth, in the end, was still better than the prettiest of lies." So says Will Klein, whose search for his missing and allegedly murderous brother, Ken, leaves him doubting the actions of everybody he's ever loved.

Eleven years ago, Ken fled his family's suburban New Jersey neighborhood after Will's ex-girlfriend, Julie Miller, was raped and strangled. The Kleins eventually convinced themselves that Ken perished on the lam. But as Will discovers, the facts are not so simple. On her deathbed, his mother tells him that Ken is still alive. Then Will's girlfriend and "soul mate" disappears too, only to have her fingerprints turn up at a New Mexico homicide scene. How are these tragedies connected? And what's their relationship to the recent appearance of a contract killer known as the Ghost? With help from an abused ex-hooker, a former white supremacist turned yoga guru, and Julie's younger sister, Will finds himself in a tightly twisted plot that turns on double identities and misplaced trust and that forces him to dig for the courage he was always sure he lacked.

Although the premise sounds much like that of Harlan Coben's last book, the acclaimed Tell No One, and the books' ingenuous protagonists are nearly interchangeable, Gone for Good quickly establishes its separate but equally suspenseful identity. This is a tale of manifold deceptions guaranteed to show its readers up as suckers, and to make them love every moment of the experience. --J. Kingston Pierce

“A thriller of runaway tension...Masterful suspense and explosive twists of fate.”
-Iris Johansen

“In this pulse-pounding hunt, Harlan Cobenlayers secret upon secret, crisscrossing years and crime scenes...a beach-read so gripping it ought to come with a jumbo tube of sunscreen...bottom line: tell everyone.”
-People

“Tell No One rocks the house. My head felt like a pretzel by the time i was done because i never, not once, saw where the book was going until Coben wanted me to. an exhilarating, bang-up, porsche turbo of a novel that you absolutely will not put down.”
-Dennis Lehane

“I forced myself to read slowly. I wanted to savor every clue, every detail, and I never wanted it to end. There are numerous aspects to the clincher ending, with surprises in store for the reader until the very last page.”
-USA Today

“This is suspense at its finest--gut-wrenching thrills and honest, heart-tugging emotion. A big book in every sense of the word, Tell No One speeds along at such a breakneck pace that we have to remind ourselves continually to slow down and savor the writing--and Coben's marvelous characters.”
-Jeffery Deaver