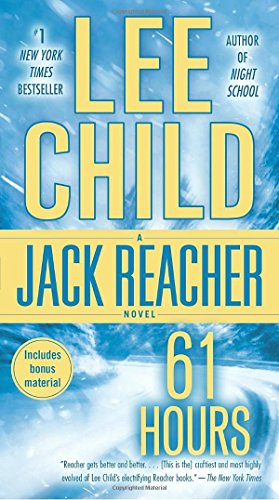 “Child is a superb craftsman of suspense, juggling several plots and keeping his herrings well-rouged. . . . Chances are you’ll want to seek out other Reacher adventures the moment you finish.”—Entertainment Weekly

A bus crashes in a savage snowstorm and lands Jack Reacher in the middle of a deadly confrontation. In nearby Bolton, South Dakota, one brave woman is standing up for justice in a small town threatened by sinister forces. If she’s going to live long enough to testify, she’ll need help. Because a killer is coming to Bolton, a coldly proficient assassin who never misses.

Reacher’s original plan was to keep on moving. But the next 61 hours will change everything. The secrets are deadlier and his enemies are stronger than he could have guessed—but so is the woman he’ll risk his life to save.

“Masterful . . . a tour-de-force of both structure and suspense.”—The Providence Journal

“Child keeps his foot hard on the throttle. . . . This is Child in top form, but isn’t he always?”—Booklist (starred review)

“Compulsively addictive [with] an explosive climax that will have you tearing out your hair until Reacher’s next appearance.”—The Miami Herald

Every book starts with a grab-bag of ideas. I sat down to write 61 Hours with six things on my mind. First was the title...it just popped into my head and stayed there (and I knew I wanted the 61 to be written in figures, not words, so if you’re the kind of reader who arranges your shelves alphabetically--I apologize!)

Second, I knew it would once again feature Jack Reacher...over the last 13 books he’s built up such enthusiasm and loyalty among readers I knew I’d be crazy not to keep on reporting his adventures.

Thirdly, I knew I wanted very, very cold weather. My fifth book, Echo Burning, was set in the west of Texas in a heat wave, and the extreme temperature was seen as a real character in the story, so I wanted to try the same thing again, but this time at the opposite end of the thermometer. I was a little nervous at first, because one of my early writer heroes was Alistair MacLean, who wrote cold weather so well. But most of his cold stories were set up on the polar ice cap, or above the Arctic Circle, and I knew Reacher would have no reason to go there. In the end I chose South Dakota in the depths of winter as a location, and I’ll know I’ve succeeded if you shiver over every page.

Fourth, fifth, and sixth, I had three names to work with--winners of your-name-as-a-character charity auction lots. A gentleman named Mark Salter helped out with autism research and asked for his mother’s name to be in the book--Mrs. Janet Salter; and then for two separate literacy projects, a man named Andrew Peterson won an auction, and the man who won the other wanted his wife’s name included--Susan Turner. All three winners made very generous donations to the various charities, so I decided it was only fair to make all three into important, central characters.

The only problem was...Mr. Turner asked that the character named after his wife have a romantic entanglement with Reacher. Read 61 Hours to see if he got his wish!

Lee Child is the author of nineteen New York Times bestselling Jack Reacher thrillers, ten of which have reached the #1 position. All have been optioned for major motion pictures; the first, Jack Reacher, was based on One Shot. Foreign rights in the Reacher series have sold in almost a hundred territories. A native of England and a former television director, Lee Child lives in New York City.

Book Description Mass Market Paperback. Condition: New. 1st. Excellent condition. Interior is tight, bright, and clean; no underlining, notes, or highlighting. The binding is smooth and solid. The paperback cover is clean and sticker-free. Minor scuffing and/or corner bumps on the paperback covers due to shelf wear. 100% Satisfaction Guaranteed. All items are carefully enclosed with bubble wrap. We ship promptly and worldwide via US Post and will email you a tracking number. Seller Inventory # SKU0034342

Book Description Paperback. Condition: New. Reprint. Language: English. Brand new Book. #1 NEW YORK TIMES BESTSELLER - THE BLOCKBUSTER JACK REACHER SERIES THAT INSPIRED TWO MAJOR MOTION PICTURES AND THE UPCOMING STREAMING SERIES REACHER "Reacher gets better and better. . . . [This is the] craftiest and most highly evolved of Lee Child's electrifying Reacher books."--Janet Maslin, The New York Times A bus crashes in a savage snowstorm and lands Jack Reacher in the middle of a deadly confrontation. In nearby Bolton, South Dakota, one brave woman is standing up for justice in a small town threatened by sinister forces. If she's going to live long enough to testify, she'll need help. Because a killer is coming to Bolton, a coldly proficient assassin who never misses. Reacher's original plan was to keep on moving. But the next 61 hours will change everything. The secrets are deadlier and his enemies are stronger than he could have guessed--but so is the woman he'll risk his life to save. Seller Inventory # ABZ9780440243694