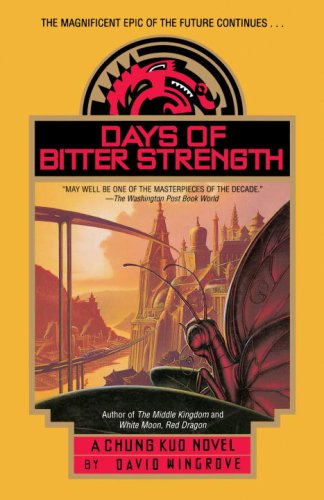 The final book in David Wingrove's critically acclaimed science fiction masterpiece is set among the red-roofed houses of "China on the Rhine," where former freedom-fighter Emily Ascher now serves as mother to the orphan boys of a war-devastated land. But unto the people of Chung Kuo, two children will be born, a baby girl smothered and thrown away, but not yet dead, and a baby boy delivered into a hostile land, yet determined to fight for his life. They are part of a new generation who will see more death than any who have gone before.
Although peace seems to reign, the puppet master of an army of giant androids plans one final absolute destruction. And although the great T'ang, the dictators of Earth, are gone, mega corporation GenSyn remains*as does its pleasure drug which will turn Chung Kuo into a funeral pyre. Now the only escape lies in sending survivors toward new stars, or joining Emily Ascher in a battle for liberty and a new Earth.

In addition to the seven novels in the Chung Kuo saga, The Middle Kingdom; The Broken Wheel; The White Mountain; The Stone Within; Beneath the Tree of Heaven; White Moon, Red Dragon; and Days of Bitter Strength, David Wingrove is the co-author (with Brian Aldiss) of the Hugo Award-winning nonfiction book Trillion Year Spree, a critical history of science fiction, and with Robyn and Rand Miller of Myst: The Book of Atrus.  He lives in North London with his wife, who is also a novelist, and four daughters.
From the Paperback edition.

Where did it all begin?  When was the first step taken on that downward path that led to Armageddon?  Perhaps it was on that fateful June day in 2043 when President James B.  Griffin, last of the sixty-two presidents of the United States of America, was assassinated while attending a baseball game at Chicago's Comiskey Park.

The collapse of the sixty-nine States of the American Empire that followed and the subsequent disintegration of the allied Western economies brought a decade of chaos.  What had begun as the "Pacific Century" was quickly renamed the "Century of Blood"--a period in which the only stability was to be found within the borders of China.  It was from there--from the great landlocked province of Sichuan--that a young Han named Tsao Ch'un emerged.

Tsao Ch'un had a simple--some say brutal--cast of mind.  He wanted to create a Utopia, a rigidly stable society that would last ten thousand years.  But the price was high.  In 2062 Japan, China's chief rival in the East, was the first victim of Tsao Ch'un's idiosyncratic approach to realpolitik when, without warning--following Japanese complaints about Chinese incursions in Korea--the Han leader bombed Honshu, concentrating his nuclear devices on the major population centers of Tokyo and Kyoto.  When the dust cleared, three great Han armies swept the smaller islands of Kyushu and Shikoku, killing every Japanese they found, while the rest of Japan was blockaded by sea and air.  Over the next twenty years they would do the same with the islands of Honshu and Hokkaido, turning the "islands of the gods" into a wasteland while the crumbling Western nation states looked away.

The eradication of Japan taught Tsao Ch'un many lessons.  In future he sought "not to destroy but to exclude"--though his definition of exclusion often made it a synonym for destruction.  As he built his great City--huge, mile-high spiderlike machines moving slowly outward from Pei Ch'ing, secreting vast, tomb-white hexagonal living sections, three hundred levels high and a kilometer to a side--so he peopled it, choosing carefully who was to live within its walls.  As the City grew, so his servants went out among the indigenous populations he had conquered, searching among them for those who were free from physical disability, political dissidence, or religious bigotry.  And where he encountered organized opposition he enlisted the aid of groups sympathetic to his aims to carry out his policies.  In Southern Africa and North America, in Europe and the People's Democracy of Russia, huge movements grew up, supporting Tsao Ch'un and welcoming his "stability" after decades of chaos and suffering, only too pleased to share in his crusade of intolerance--his "Policy of Purity."

Only the Middle East proved problematic.  There a great Jihad was launched against the Han--Moslems and Jews casting off centuries of enmity to fight against a common threat.  Tsao Ch'un answered them as he had answered Japan.  The Middle East and large parts of the Indian subcontinent were reduced to a radioactive wilderness.  But it was in Africa that his policies were most nakedly displayed.  There the native peoples were moved on before the encroaching City, and, like cattle, starved or died from exhaustion, driven on by the brutal Han armies.  Following historical precedent City Africa was reseeded with Han settlers.

In terms of human suffering Tsao Ch'un's pacification of the globe was unprecedented.  Contemporary estimates put the cost in human lives at well over three billion.  But Tsao Ch'un was not content merely to eradicate all opposition, he wanted to destroy all knowledge of the Western-dominated past.  Like the First Emperor, Ch'in Shih Huang Ti, twenty-four centuries before, he decided to rewrite the history books.  Tsao Ch'un had his officials collect all books, all tapes, all recordings, allowing nothing that was not Han to enter his great City.  Most of what they collected was simply burned, but not all.  Some was adapted.

One group of Tsao Ch'un's advisers--a group of Scholar-Politicians who termed themselves the "Thousand Eyes"--persuaded their Master that it would not be enough simply to create a gap.  That, they knew, would attract curiosity.  What they proposed was more subtle and, in the long term, far more persuasive.  With Tsao Ch'un's blessing they set about reconstructing the history of the world, placing China at the center of everything--back in its rightful place, as they saw it.  It was a lie, of course, yet a lie to which everyone subscribed .  .  .  on pain of death.

But the lie was complex and powerful, and people soon forgot. New generations arose who knew nothing of the real past and to whom the whispers and rumors seemed mere fantasy in the face of the solid reality they saw all about them.  The media fed them the illusion daily, until the illusion became, even for those who worked in the Ministry responsible, quite real and the documents they dealt with some strange aberration--a mass hallucination, almost a disease that had struck the Western peoples of the great Han Empire in its latter years.  The officials at the Ministry even coined a term for it--racial compensation--laughing among themselves whenever they came across some clearly fantastic reference in an old book about quaint religious practices or races of black--think of it, black!--people.

Tsao Ch'un killed the old world.  He buried it deep beneath his glacial City.  But eventually his brutality and tyranny proved too much even for those who had helped him carry out his scheme.  In 2087 his Council of Seven Ministers rose up against him, using North European mercenaries, and overthrew him, setting up a new government.  They divided the world--Chung Kuo--among themselves, each calling himself T'ang, "King." But the new government was far stronger than the old, for the Seven made it so that no single one of them could act on any major issue without the consensus of his fellow T'ang.  Adopting the morality of New Confucianism, they set about consolidating a "peace of ten thousand years." The keystone of this peace was the Edict of Technological Control, which regulated and, in effect, prevented change.  Change had been the disease of the old, Western-dominated world.  Change had brought its rapid and total collapse.  But Change was alien to the Han. They would do away with Change for all time.  Their borders were secured, the world was theirs--why should they not have peace and stability until the end of time?  But the population grew and grew, filling the vast City, and, buried deep in the collective psyche of the European races, something began to stir--some long-buried memory of rapid evolutionary growth.  Change was needed.  Change was wanted.  But the Seven were against Change.
For more than a century they succeeded and their great world-spanning City thrived.  If a man worked hard he could climb the levels into a world of space and luxury, if he failed in business or committed a crime he would be demoted--down toward the crowded, stinking Lowers.  Each man knew his place in the great scheme of things and obeyed the dictates of the Seven.  Yet the pressures placed upon the system were great, and as the population climbed toward the forty-billion mark something had to give.

It began with the assassination of the Li Shai Tung's Minister, Lwo Kang, in 2196, the poor man blown into the next world along with his Junior Ministers while basking in the imperial solarium.  The Seven--the great Lords and rulers of Chung Kuo--hit back at once, arresting Edmund Wyatt, one of the leading figures of the Dispersionist faction responsible for the Minister's death.  But it was not to end there.  Within days of the public execution of Wyatt in 2198, the Dispersionists--a coalition of high-powered merchants and politicians--struck another deadly blow, killing Li Han Ch'in, son of the T'ang, Li Shai Tung, and heir to City Europe, on the day of his wedding to the beautiful Fei Yen.

It might have ended there, with the decision of the Seven to take no action in reprisal for Prince Han's death--to adopt a policy of peaceful nonaction, wuwei--but for one man such a course of action could not be borne.  Taking matters into his own hands, Li Shai Tung's General, Knut Tolonen, marched into the House of Representatives in Weimar and killed the leader of the Dispersionists, Under-Secretary Lehmann.  It was an act almost guaranteed to tumble Chung Kuo into a bloody civil war unless the anger of the Dispersionists could be assuaged and concessions made.

The five-year "War-That-Wasn't-a-War" left the Dispersionists broken, their leaders dead, their Companies confiscated.  The great push for Change had been crushed and peace returned to Chung Kuo. But the war had woken older, far stronger, currents of di...