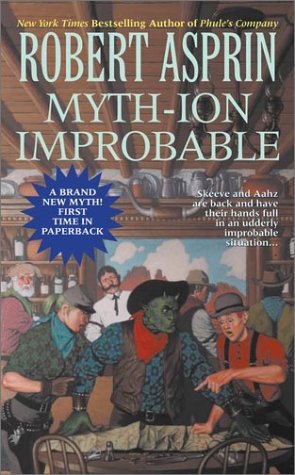 Apprentice magician Skeeve, his scaly mentor Aahz and beautiful ex-assassin Tanda are back—and this time they're treasure hunting in a dimension that combines the Wild West with the vampire-cursed hills of Transylvania—where gold is common as dirt, and danger lurks behind every sagebrush.

Robert (Lynn) Asprin was born in 1946. While he has written some stand alone novels such as Cold Cash War, Tambu, The Bug Wars and also the Duncan and Mallory Illustrated stories, Bob is best known for his series: The Myth Adventures of Aahz and Skeeve; the Phule novels; and, more recently, the Time Scout novels written with Linda Evans. He also edited the groundbreaking Thieves World anthologies with Lynn Abbey. His most recent collaboration is License Invoked written with Jody Lynn Nye. It is set in the French Quarter, New Orleans where he currently lives.

Book Description Condition: New. In this brand new Myth tale, Skeeve, Aahz, and Tanda journey into the Kowtow realm to retrieve a golden cow that gives gold-laced milk. But this strange land combines the Wild West with vegetarian cowboys and the vampire-cursed hills of Transylvania where gold is common as dirt, and danger lurks behind every sagebrush. Seller Inventory # 9780441009626