Items related to The Enemy Within 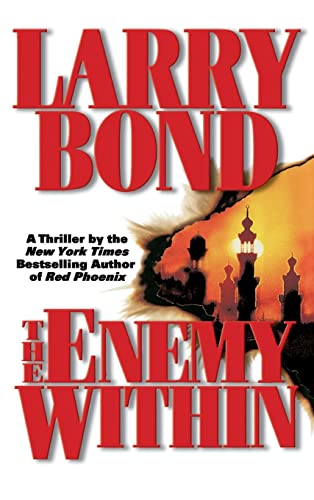 America's largest cities are in flames. Its majestic landmarks are in ruins. Oceans and boundaries offer no protection. It is the first sophisticated, intelligently planned, and utterly ruthless terrorist campaign waged on U.S. soil. As national leaders, armies, and artificial intelligence strive to win the unconventional war, two men--once friends, now adversaries to the death--race to a decisive confrontation.

What if a foreign rogue nation launched a war against the United States within its own borders? America's largest cities are in flames. Its majestic landmarks are in ruins. Electronic sabotage cripples its far-flung communications systems. Race battles against race in a raging civil conflagration. The first waves of a meticulously orchestrated international terrorist campaign have achieved a stunning and terrifying success. As grim national leaders hunker down with advisors, as the finest living minds in strategic intelligence together with state-of-the-art computers link up to search out and destroy the source of the savagery, as armies both with and without uniforms mobilize to win the ultimate unconventional war, two men - once friends, now adversaries to the death - race to a decisive confrontation. On one side is General Amir Taleh, an implacable foe of the United States, a nimble survivor of the brutal cross-currents of Iran's internal politics, and a shrewd fighter who believes that killing for revenge is pointless but killing for a higher purpose is justified. Opposing him are two American operatives who become tactical allies as well as unexpected lovers: Colonel Peter Thorn, the Delta Force veteran who has faced down the masters of terror on foreign soil and now feels powerless to defeat them at home; and Special Agent Helen Gray, as beautiful as she is a formidable player in the old-boy network of special operations. Together, they must find a way to defeat Taleh and his forces before the West awakens to its greatest nightmare of all.

Larry Bond is a former anti-submarine technology expert and naval intelligence officer. He lives in Virginia.

3. The Enemy Within (Hardback or Cased Book)

5. The Enemy Within (Hardback)

Shipping: US$ 19.23
From United Kingdom to U.S.A.
Destination, rates & speeds

Shipping: US$ 18.39
From United Kingdom to U.S.A.
Destination, rates & speeds

10. The Enemy Within [Hardcover] Bond, Larry and Larkin, Patrick

Book Description Condition: New. A U.S. soldier and expert in counter-terrorism wages a desperate campaign to stop a covert reign of terror that terrorists from a rogue foreign nation are waging on American cities and suburbs. Adventure & Suspense . Seller Inventory # 9780446516761