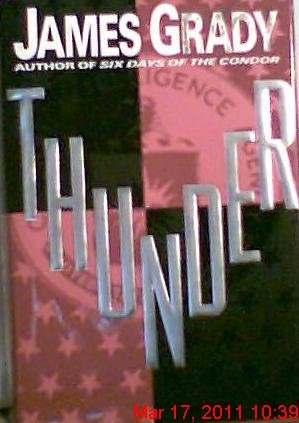 The author of River of Darkness presents a shocking thriller in which John Lang, a young CIA agent, investigates his own agency after a Wall Street bombing and an "officially" stray bullet that kills his partner. 50,000 first printing. Major ad/promo. Lit Guild Alt.

Though Grady's 11th novel features the sort of spy-vs.-spy trickery that sparked his exciting debut, Six Days of the Condor , this byzantine tale of a CIA agent on the run never quite catches fire. The story opens with two bloody crimes: the apparent terrorist bombing of a Manhattan skyscraper and, two months later in D.C., the death of veteran CIA agent Frank Mathews by what cops and the Company consider a "stray bullet." Mathews's partner, John Lang, doesn't buy that explanation, especially not when his superior tries to prevent his continuing Mathews's probe into a mysterious letter concerning the murder of an American in Europe. Working without CIA sanction, Lang links the letter to a shipment of plastic explosives likely used in the Manhattan bombing. Further murders ensue as Lang, nosing in on a shocking conspiracy, is hunted by an assassin and framed as an embezzler. Still, the agent finds time to romance both a colleague and Mathews's daughter. Despite the twisty action and spy arcana, the narrative's bleak tone, grim characters and increasingly obvious villain leach suspense from this technically proficient but uninvolving story. Literary Guild alternate ; movie rights optioned by War ner Brothers.
Copyright 1994 Reed Business Information, Inc.

With such sophisticated, best-selling thrillers as Six Days of the Condor (1974) on his resume, Grady should have no trouble generating demand for this story of the rise of a dangerous, J. Edgar Hoover-like CIA official.
Copyright 1993 Reed Business Information, Inc.