Items related to The Notebook 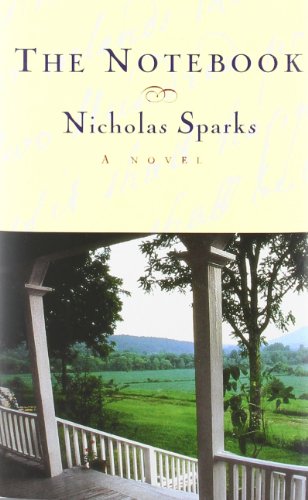 Experience the unforgettable, heartbreaking love story set in post-World War II North Carolina about a young socialite and the boy who once stole her heart -- one of PBS's "Great American Reads".

Every so often a love story so captures our hearts that it becomes more than a story-it becomes an experience to remember forever. The Notebook is such a book. It is a celebration of how passion can be ageless and timeless, a tale that moves us to laughter and tears and makes us believe in true love all over again...

At thirty-one, Noah Calhoun, back in coastal North Carolina after World War II, is haunted by images of the girl he lost more than a decade earlier. At twenty-nine, socialite Allie Nelson is about to marry a wealthy lawyer, but she cannot stop thinking about the boy who long ago stole her heart. Thus begins the story of a love so enduring and deep it can turn tragedy into triumph, and may even have the power to create a miracle...

"Somewhere," muses Noah Calhoun, while sitting on his porch in the moonight, "there were people making love." The Notebook, a Southern-fried story of love-lost-and-found-again, revolves around a single time-honored romantic dilemma: will beautiful Allison Nelson stay with Mr. Respectability (to whom she happens to be engaged), or will she choose Noah, the romantic rascal she left so many years ago?

With over 100 million copies of his books sold, Nicholas Sparks is one of the world's most beloved storytellers. His novels include fifteen #1 New York Times bestsellers, and all of his books, including Three Weeks with My Brother, the memoir he wrote with his brother, Micah, have been New York Times and international bestsellers, and were translated into more than fifty languages. Eleven of Nicholas Sparks's novels--The Choice, The Longest Ride, The Best of Me, Safe Haven, The Lucky One, The Last Song, Dear John, Nights in Rodanthe, The Notebook, A Walk to Remember, and Message in a Bottle--have been adapted into major motion pictures.