Elliott, Cara To Surrender to a Rogue (Circle of Sin (2)) 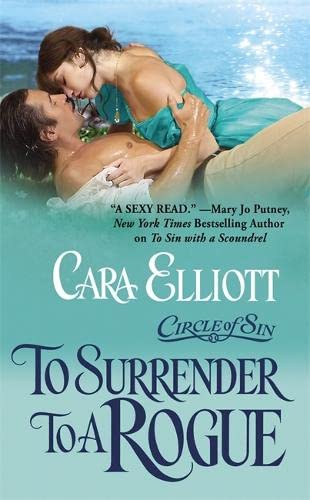 An expert in antiquities, Lady Alessandra della Giamatti arrives in Bath to excavate newly discovered Roman ruins-only to find herself caught in a web of evil intrigue by a blackmailer threatening to expose her scandalous past. The one man who can help her is Lord James "Black Jack" Pierson, a fellow member of the expedition and a sinfully handsome rogue whose tempting presence ignites a different sort of danger.

Jack has clashed with Alessandra in the past, so when she suddenly surrenders her body he can't help being suspicious. Is she a scheming temptress? Or is she truly a lady in trouble? As desire and deceptions swirl around them, Alessandra and Jack must find a way to win each other's trust. For if they don't work together to uncover a shocking truth, their enemy-and their own simmering passions-may destroy them and everything they cherish.

Cara Elliott started writing Western novels at the age of five. Later she changed her genre to Regency romance after reading Pride and Prejudice. She graduated from Yale University, and she now lives and works in New York City.

Rave for To Surrender to a Rogue:

"Blue Ribbon Review! The second book in the CIRCLE OF SIN series is simply magnificent. The characters experience real growth....James and Alessandra fight like cats and dogs...but the passion between these two could set something on fire!―Pamela Lynne, romancejunkiesreviews.com

On TO SURRENDER TO A ROGUE:

"Heat level: 5 (Scorching) ...A unique story with sizzling chemistry between a lady intellectual and an army hero rogue with a sensitive side. All I can say is...the scene in the old Roman baths steams!"―"The Season" Blog, historicalromancereleases.com/wordpress/2010/06

Raves for To Sin With A Scoundrel:

"In this nicely steamy debut, ... the romance is well drawn and intriguing."―Publishers Weekly

"The first in the Circle of Sin series by talented author Cara Elliott...this story had everything a reader could desire in a book, adventure, humor, mystery, romance, and a very naughty rake."―Singletitles.com

"4 1/2 stars! Author Cara Elliott has created a magnificently compelling read! She has paired a scholar and a scoundrel...and I had a wonderful time watching the chemistry of these two characters mix."―Dietra Fitch, Huntress Book Reviews, huntressreviews.com

2. To Surrender To A Rogue (Circle of Sin Trilogy 2)

4. TO SURRENDER TO A ROGUE (CIRCLE

5. TO SURRENDER TO A ROGUE (CIRCLE