Items related to To the Edge: A Man Death Valley and the Mystery of...

Johnson, Kirk To the Edge: A Man Death Valley and the Mystery of Endurance

To the Edge: A Man Death Valley and the Mystery of Endurance 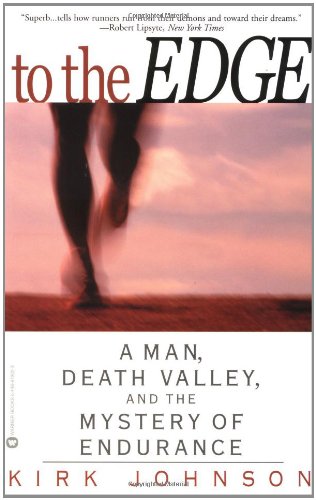 When his beloved brother commits suicide, Kirk starts running straight into the hell of Badwater, the ultimate test of endurance equal to five consecutive marathons. Alongside a group of virtual running machines, Kirk will stare down his limitations and his fears on a journey that might offer the redemption of his most personal loss.

KIRK JOHNSON is a Pulitzer-nominated writer for the New York Times. He lives in northern New Jersey with his wife and two sons.

Journalist Johnson chronicles his participation in one of the world's toughest endurance races, the 135-mile Badwater Ultramarathon, and his simultaneous emotional reckoning with family members and himself. Johnson, who had never run a regular marathon, entered the race after his brother, a highly respected athlete, committed suicide. He recruited his sister and nearly estranged living brother to help him. In the first section, Johnson describes learning about and preparing for the race. As a journalist and a participant, he met many interesting Badwater participants (the paraplegic runners especially stand out) and offers insight into the phenomenon of ultramarathons, exploring questions like "Why does Badwater exist... and persist? Why does it capture the imagination?" After a strong start, though, this part goes on too long. The fascinating second section details the actual race and affords an inside look at an endurance runner's thoughts. Johnson deftly blends excitement, tension, grief and humor. He describes his feelings on one evening of the race, blister crisis in check: "The world was surprising and filled with eye-opening wonder, and the simple act of moving through it had become a source of joy." Johnson occasionally relies on a clich‚ or two, but they are offset by lovely passages that make his unusual experience familiar and immediate to the reader. Photos. (July)Forecast: The book should do well among the boomer fitness crowd, especially runners. The quality of the writing, the national advertising campaign and the six-city author tour will boost sales further.

1. To the Edge: A Man Death Valley and the Mystery of Endurance Johnson, Kirk

2. To the Edge: A Man Death Valley and the Mystery of Endurance