Items related to Without Feathers 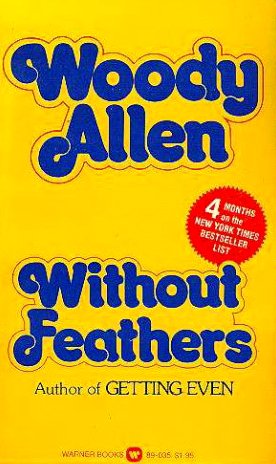 The title of Woody Allen's second collection of New Yorker-style sprint humor is a sly comment on Emily Dickinson's famous quote, "Hope is the thing with feathers." Without Feathers delivers Allen's hopeless schlub persona--you remember, what he used to be before he was either a lecher or an auteur, depending on your politics. In addition to being as funny as anything published since, to read Without Feathers is to return to a simpler time, when being a fan of his work was common, not controversial.

Though each piece is funny, two of them are particularly notable examples of Allen's distinctive style (borrowed in large part from S.J. Perelman by way of the Borscht Belt, but distinctive, nevertheless)--"The Whore of Mensa" and "If the Impressionists Had Been Dentists." Here's an excerpt from the latter:

Mrs. Sol Schwimmer is suing me because I made her bridge as I felt it and not to fit her ridiculous mouth! That's right! I can't work to order like a common tradesman! I decided her bridge should be enormous and billowing, with wild, explosive teeth flaring up in every direction like fire! Now she is upset because it won't fit in her mouth! She is so bourgeois and stupid, I want to smash her! I tried forcing the false plate in but it sticks out like a star burst chandelier.

Without Feathers is fine, funny prose, from an American master. If you're a fan, seek it out immediately. It's a document from the days when Woody was not important, but merely hysterically funny. --Michael Gerber From the Inside Flap:

Here they are--some of the funniest tales and ruminations ever put into print, by one of the great comic minds of our time. From THE WHORE OF MENSA, to GOD (A Play), to NO KADDISH FOR WEINSTEIN, old and new Woody Allen fans will laugh themselves hysterical over these sparkling gems.